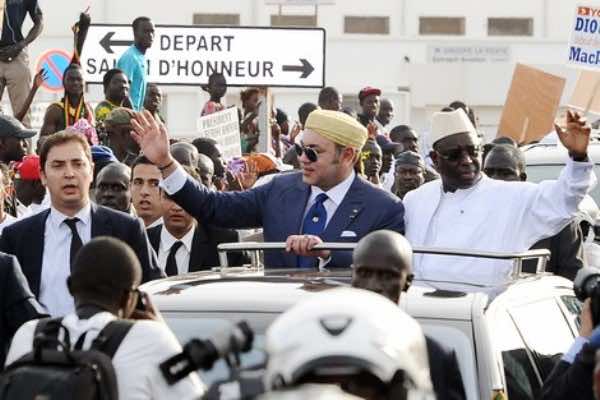 King Mohammed VI arrived, on Friday in Dakar, for an official visit to Senegal, first leg of an African tour that will take the sovereign to Côte d’Ivoire and Gabon.

Upon his arrival at the Léopold Sédar Senghor airport, the King was greeted by Senegalese president Macky Sall, speaker of Senegal’s national assembly Moustapha Niasse, prime minister Abdoul Mbaye, president of the economic and social council Aminata Tall, state minister and director of the president’s office Mor Ngom and the chief of staff of Senegalese armed forces.

The two leaders headed for the VIP stand to salute the flags of both countries while national anthems were playing.

The sovereign was greeted afterwards by members of Senegal’s government, the African, Islamic and Arab diplomatic corps accredited to Dakar, leaders of brotherhoods, representatives of the Moroccan community in Senegal, Morocco’s ambassador in Dakar Taleb Berrada and members of the Moroccan diplomatic mission.

The Senegalese head of state was greeted by the official delegation accompanying the King, namely Prince Moulay Ismail and Cherif Moulay Youssef.

After a short break at the VIP lounge, the official procession went to the King’s place of residence.