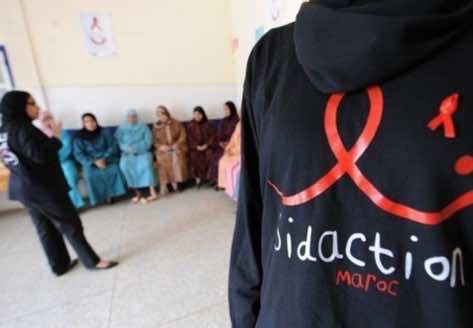 “I don’t have anything,” said Asmaa  with a sigh as she stepped out of the mobile clinic offering free AIDS tests  in Sale, a conservative city in Morocco where the veiled young woman lives.

Around 29,000 people are infected with HIV in a country of 33 million,  according to estimates by the Pan African AIDS Organisation (OPALS), a  relatively low figure compared with other Arab countries.

But large swathes of Moroccan society are religious, with sex outside of  marriage and adultery still illegal, and the AIDS virus has long been a taboo  subject.

Around 80 percent of victims don’t even know they are HIV carriers,  according to OPALS, which was set up in 1994 to combat the spread of the  disease and is active in 19 different parts of the country.

While only a small proportion of the national population is infected (0.1  percent), the virus is concentrated in two specific areas — the southwestern tourist region of Agadir, notably among prostitutes and gay men, and the northern town of Nador, among drug addicts.

Across much of Morocco, conservative religious attitudes and the stigma attached to AIDS can complicate the efforts made in testing, treatment and prevention.

But in Sale’s Douar Jbala, a stronghold of the Islamist Justice and Development Party that heads Morocco’s coalition government, OPALS officials carrying out the AIDS tests are happy with the response to their campaign.

Like other poor neighbourhoods, Douar Jbala is “vulnerable”, because of the conservative attitudes and prejudices that hold sway here, so the medics welcome the large turnout.

“There is an enthusiasm, particularly among the women. It’s really important for us, it shows that it is no longer such a taboo,” said Dr Zakia Afkari, supervising the operation in partnership with Morocco’s health ministry.

These young women “don’t hesitate to come on their own,” she added, before heading back into the clinic where dozens of people were waiting to be tested.

Asmaa, 21, said she decided to show up “without thinking too much” about it.

“I came across it by chance when I noticed a banner inviting locals to take the AIDS test. I hesitated for a moment and then came to the clinic,” she explained.

“Now I’m glad I did,” she added with a smile, holding a piece of cotton wool on her finger where the blood sample was taken.

There was no sign of embarrassment among those standing outside the truck where the free and anonymous tests were performed.

“For me there’s no shame in being tested for AIDS. It’s not a problem, it’s not against my religion,” said 18-year-old Khadija.

Health experts say Morocco is ahead of other Arab countries partly because it began its anti-AIDS campaign early, in the 1990s, developing infrastructure to support victims of the virus, such as a hospital in the city of Casablanca run by the Association for the Fight against AIDS.

“Despite all the efforts, the taboo still exists,” Alami said. “There is a problem of discrimination and stigmatisation for people who live with the HIV virus.”

“Most of them prefer not to be seen (to be infected), and this is often an obstacle in the fight against AIDS, in terms of prevention and support.”

The clinic in Douar Jbala is one step in the struggle against that stigma.

“We have to get out among the poor and vulnerable, to make contact with them and raise their awareness,” said OPALS campaign organiser Khadija Ouazzani.