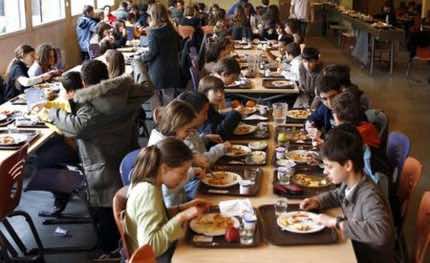 It seems that France, the country of freedom, human rights and democracy, still struggles to come to term with the presence of a significant Muslim community. After the pressure some Muslim women had to face because of their choice to wear the headscarf, this time around we witness a different form of pressure against another component of the Muslim community: children.

According to the “Collectif Contre l’Islamophobie en France” (Group Against Islamophobia in France), a Muslim primary school boy has been forced to choose between eating forbidden food in Islam such as pork and his future educational career at his school. The family of the child tried to adapt to the principle of the school which states that “a child has to experience everything” irrespective of his cultural and religious backgrounds, but its efforts were to no avail.

The Child’s request and his subsequent cries to have meatless meals didn’t change anything in the abusive behavior of school’s headmaster. Threatened to be deprived of breaks and playtime, isolated at a table and forbidden to speak to his mates during lunchtime, etc are a few of the many acts of marginalization and stigmatization against the child because of his religious beliefs.

Outraged by this treatment of her child, the mother complained to the head of the school canteen who told her either to convince her child to adhere to the secular principles of the school or opt for Islamic school.

When I went to the school headmaster, “She spoke of secularism and when I told her that his speech was not consistent, she told me that if this mode does not suit me, I could choose to put my son in a Muslim school,” the mother said in a statement to Collectif Contre l’Islamophobie en France.”