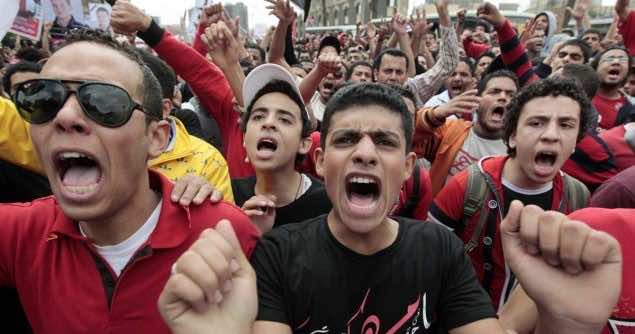 Hundreds of Egyptian football fans protested outside the public prosecutor’s office on Saturday, demanding the release of fellow members of their Ultras hardcore fan group.

Chanting and clapping in unison, the Ultras closed off the area outside the prosecutor’s office in central Cairo to demand the release of 38 members arrested in the Nile Delta province of Menufia for “belonging to an illegal group.”

The prosecutor this week also charged them with attempting to set fire to a court and assaulting its employees while one of their members, Gamal Helal, was being tried inside, a security official said.

“Down with the interior ministry” and “Freedom!” they chanted as they banged their drums and set off red-coloured smoke bombs.

The arrest of the Ultras members was the first sign of a crackdown on the powerful organisation that became a major political force during the uprising that toppled Hosni Mubarak in 2011.

The Ultras have long had strained relations with police, but tensions boiled over after a deadly stadium riot in the canal city of Port Said last year in which many fan group members died.