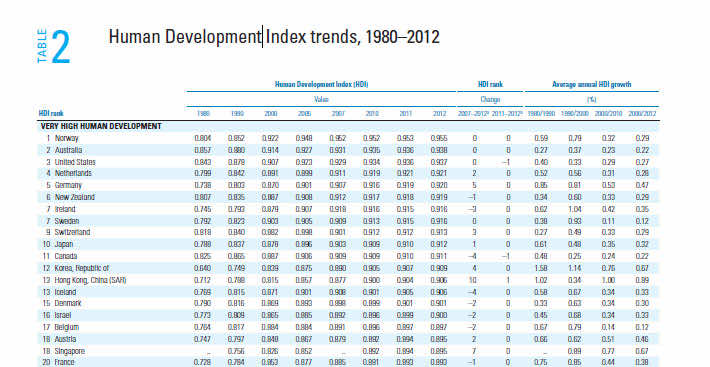 According to the report, Morocco ranks 15th in the Arab world and 4th in the Maghreb region behind Libya, Algeria and Tunisia.

In accordance with this division, Morocco is in the category of medium human development index along with Jordan, occupied Palestinian territory, Egypt, Syrian Arab Republic, and Iraq.

Libya, Tunisia and Algeria, three other countries of the Maghreb region fared better than Morocco, as they are belong to the category of high human development index. In addition to Libya (64), Algeria (93) and Tunisia (94), this category includes Bahrain (48), Kuwait (54), Saudi Arabia (57), Libya, Lebanon (72), and Oman (84).

Within the broader Arab region, Qatar tops the list of human development index, flowed by the United Arab Emirates, which rank 36th and 41th respectively at the global level. Both countries are in the category of very high development index.

Saudi Arabia, Qatar, Algeria and Tunisia are the only Arab countries that achieved high rates of growth in gross national income per capita during the period 1990-2012.

The report identifies unemployment and presence of women in the labor force among the pressing challenges facing the Arab region.

“The Arab States region has both the highest rate of unemployment and the lowest labor force participation rate, especially for women,” said Sima Bahous, Director of UNDP’s Regional Bureau for Arab States.

“For many Arabs today, the true measure of development achievement lies in the number of decent jobs created, and opportunities afforded to people to be productive and economically secure,” she added.