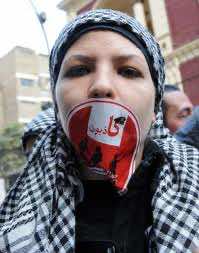 Women are “the slaves of this age,” according to an Egyptian politician who took a stand against the country’s Muslim Brotherhood to back a UN declaration on violence against women.

Mervat Tallawy, who headed the Egyptian delegation at a United Nations conference that ended late Friday, said that despite the hard-fought declaration, secured after two weeks of tense negotiations, more help must be given to women in the Middle East.

Tallawy stunned many at the UN Commission on the Status of Women –marked
by blocking tactics by conservative Muslim and Roman Catholic states — by backing the document that set global standards to combat violence against women.

Despite growing human rights, wealth and other progress, Tallawy told  reporters after the landmark accord was approved that there is still too much discrimination.

“Women are the slaves of this age. This is unacceptable and particularly in our region,” Tallawy said.

Tallawy, a diplomat turned politician and head of Egypt’s National Women’s Council, said “international solidarity is needed for women’s empowerment and preventing this regressive mood whether in the developing countries or developed, in the Middle East in particular.”

The Muslim Brotherhood, from which President Mohamed Morsi hails, said this week that the proposed UN document “undermines Islamic ethics” and “would lead to the complete disintegration of society.”

Tallawy said there is “a global wave of conservatism, of repression against women. And this paper is a message that if we can get together, hold power together, we can be a strong wave against this conservatism.”

When asked about the Muslim Brotherhood’s opposition, the official said she had already challenged Morsi in his office about Egypt’s constitution.

“I believe in women’s cause. I don’t take money from the government, I work voluntarily. If they want to kick me out they can, but I will not change my belief in women.”

The UN declaration broke new ground by stating that violence against women could not be justified by “any custom, tradition or religious consideration.”

This had infuriated Iran and other conservative Muslim states.

But Western nations had to tone down their demands for references to gay rights and sexual health rights to secure the accord after two weeks of tense negotiations. The United States and others said there should have been an acknowledgement that lesbian women also deserve equal rights.

“I was really afraid that we would not have an agreement,” Norway’s Gender Equality Minister Inga Marte Thorkildsen told AFP. Scandinavian nations took a tough stance at the conference calling for an aggressive document.

“I am very happy that it was possible to isolate some of the most reactionary groups, including the Vatican and Iran.”

Thorkildsen was upset however that gender identity and sexual orientation was not included in the declaration.

“That was impossible and I think that it is sad that so many countries don’t want to protect their own inhabitants from violence just because they have a different sexual orientation or gender identity. I find that unacceptable.”

The minister said her concern now would be how countries apply the statement. The United Nations has called for concrete action to apply the commitments.

The minister said there also had to be action to prevent a weakening of women’s rights already achieved and highlighted “backlashes after the Arab Spring” to back comments made by Tallawy.

“There are too many forces who don’t accept that women have the exact same rights as men. We have to fight in the future,” said Thorkildsen.