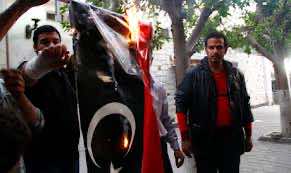 Tripoli’s embassy in Cairo said Saturday it was suspending work indefinitely, five days after demonstrators attacked the mission and burned the Libyan flag to protest the death of an Egyptian Copt in Libya.

A statement by the embassy said consular activity would be suspended but gave no reason for the decision which will affect Egyptians seeking to travel to neighbouring Libya for work.

But an embassy official, who declined to be named, told AFP that the decision was taken after clashes last week between Copts and embassy guards and that the mission will remain close “until the crisis is settled.”

The clashes followed the March 11 announcement by a Cairo-based human rights lawyer of the death from torture of an Egyptian Coptic Christian held in Libya’s  eastern city of Benghazi.

On March 1, a Libyan security official said some 50 Egyptian Copts were arrested on illegal immigration charges, although they were suspected of proselytising in Benghazi.

Since the 2011 revolution that ousted Moamer Kadhafi, Libya’s small Christian minority has expressed fears over Islamic extremism, especially with the rise of armed militias enforcing their own law in the absence of central control.

On Thursday, gunmen entered an Egyptian Coptic church in Benghazi and started a fire in it. The church was previously attacked in late February and its priest and assistant assaulted.

Copts account for 6-10 percent of the Egyptian population and are the largest Christian community in the Middle East.