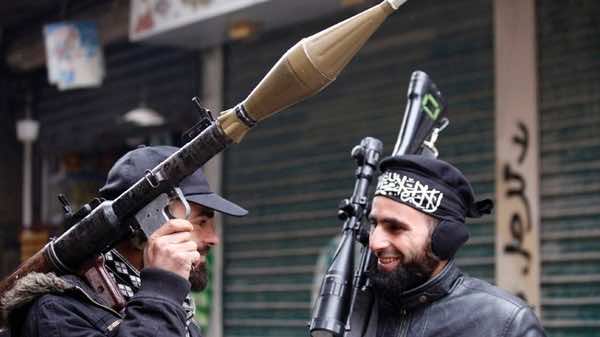 Syrian rebels have seized several weapons depots in the village of Khan Toman in Aleppo province after days of fierce clashes, a military source told AFP on Sunday.

“Opposition fighters gained control over weapons and ammunition stores in the village of Khan Toman in southern Aleppo province on Saturday after fierce fighting that went on for more than three days,” the source said.

He said the stores contained “a small number of ammunition boxes remaining after the main stock was transferred over a period of more than four months.”

But activists said the opposition had taken control of “huge reserves,” and video posted online showed fighters examining dozens of crates containing weapons and ammunition inside one warehouse.

“These are spoils from (Syrian President) Bashar al-Assad,” the person filming the warehouse says, as fighters move from crate to crate, urging the camera to film the weapons.

“Rockets, film these rockets,” they say. “These are 107-mm caliber, made in Iran,” they add. “These are the rockets that Bashar al-Assad was hitting us with.”

The video says the capture of the depots was led by the Martyrs of Syria and the Hittin Brigades of the rebel Free Syrian Army.

The capture of the arms depots was confirmed by the Syrian Observatory for Human Rights watchdog, which also reported “heavy fighting between regime forces and rebel fighters in the area of Khan Toman” on Sunday.

In Damascus, regime forces were shelling the southern district of Al-Hajar al-Aswad, the group said, adding that fighting continued in the northern Barzeh neighborhood, which residents began fleeing a day earlier under heavy fire.

The group also reported shelling of the border village of Qusayr in central Homs province. Fighting in the area has intensified in recent days, with villages across the border in Lebanon reporting the sound of explosions and heavy gunfire.

On Saturday, a brigadier general in the Syrian army and his son, a captain, defected after preparations with the country’s armed opposition.

Brigadier General Mohammed Khalouf and his son, Izz al-Din, said their plan to turn their backs on Assad’s forces took time and planning to materialize.

“Preparations for my defection from the Assad regime started with coordinated planning with different factors of the Syrian revolution until it succeeded,” the brigadier general said.