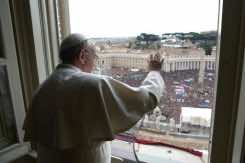 World leaders arrived in Rome ahead of an inauguration mass for Pope Francis who receives compatriot President Cristina Kirchner of Argentina on Monday in his first meeting with a head of state.

The first pontiff from Latin America had testy relations with Kirchner when he was Buenos Aires’ archbishop, Jorge Mario Bergoglio, particularly over gay marriage and abortion laws.

The pope has won hearts with his humble style but is haunted by criticism at home for failing to speak out during Argentina’s brutal “Dirty War” when he was head of the country’s Jesuits.

The Vatican has firmly denied claims that he failed to protect two Jesuit priests who were tortured by the 1976-1983 regime, saying that he had in fact protected lives during the dictatorship.

Francis’s reign is already proving ground-breaking with an informal style that is not customary in the Vatican’s austere halls of power.

He has called for a “poor Church for the poor”, has warned cardinals against worldly glories and has said the Church could crumble away “like a sand castle” without spiritual renewal.

The leader of the world’s 1.2 billion Catholics will be formally enthroned Tuesday at a mass in St Peter’s Square, with city authorities preparing for an influx of up to a million people to Rome.

Zimbabwean President Robert Mugabe flew into Rome on Monday, sidestepping a travel ban that applies to the EU but not to the sovereign Vatican City state.

Mugabe has been widely criticised for human rights abuses in the southern African country he has ruled uninterrupted since 1980.

As he arrived, there was fresh controversy in Zimbabwe over the arrest of four of Prime Minister Morgan Tsvangirai’s aides and a prominent human rights lawyer.

A practising Catholic, the 89-year-old Mugabe visited the Vatican previously in 2011 for the beatification of late pope John Paul II.

In 2005, he attended John Paul II’s funeral on a visit that drew controversy after Britain’s Prince Charles shook hands with him.

The pope’s meeting with Kirchner later on Monday will be closely watched as a first diplomatic test.

Upon Bergoglio’s surprise election as pontiff, Kirchner tersely wished him a “fruitful pastoral mission”, noting that he had “tremendous responsibility on his shoulders, seeking justice, equality, brotherhood and peace among mankind.”

Kirchner will meet Francis in his modest apartment in the Vatican residence, Casa Santa Marta, where he was staying as cardinal during the conclave.

He has yet to move into the main papal residence.

The new pope also faces a diplomatic minefield with the planned attendance of Taiwanese President Ma Ying-jeou, which sparked an angry response from Beijing.

China, which bitterly opposes any steps that imply recognition of Taiwan by other countries, has also long had strained relations with the Vatican in a dispute about authority over Catholics in the country.

As expected, Francis is attracting a heavyweight turnout from Latin America, home to two in five of the world’s Catholics, although he has urged his compatriots to save their money and make donations to the poor instead of travelling.

He tweeted that the event had been “very emotional”.

The first meeting between the new leaders of the Catholic and Anglican churches — Francis and Archbishop of Canterbury Justin Welby — will have to wait, however.

Welby will miss the inauguration mass because he will be on a “pilgrimage of prayer” in Britain, his office announced Sunday.

Welby, who wished Pope Francis “every blessing” following his election, will be represented at the ceremony by one of the Anglican world’s leading figures, Archbishop of York John Sentamu.

Ibrahim Isaac Sidrak, the Coptic Catholic Patriarch of Alexandria, Egypt, will also be on hand, as well as Metropolitan Hilarion, second in the Russian Orthodox hierarchy, the ANSA news agency said.