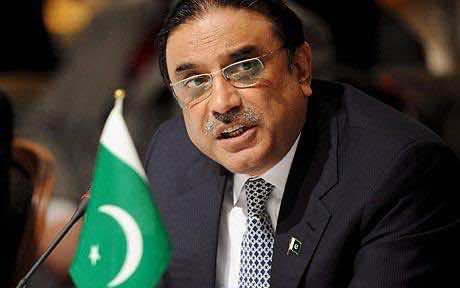 Pakistani President Asif Ali Zardari on Monday urged his Egyptian counterpart Mohamed Morsi to help efforts to end the “bloodshed” in Syria and find a solution to the crisis.

Zardari made the remarks during talks with Morsi who arrived in Pakistan as part of a South Asian tour that will also take him to India as he works to promote trade and investment in Egypt’s troubled economy.

Morsi’s one-day trip to Pakistan is the first bilateral visit by an Egyptian leader since Gamal Abdel Nasser in the 1960s, Pakistan’s foreign ministry said.

Zardari “urged for working together to end the bloodshed in Syria and to find a peaceful solution to the crisis,” presidential spokesman Farhatullah Babar said in a statement after the talks.

Zardari also stressed that “the drive for peace in Syria must be led and owned by the Syrian people and offered Pakistan’s readiness to play its role,” Babar said.

The conflict in Syria has killed about 70,000 people and forced millions from their homes according to UN figures.

Pakistani state television showed live footage of a ceremony at the presidential palace in Islamabad where Morsi was greeted with a military guard of honour.

The foreign ministry said the visit was a “watershed and a landmark” in relations between the two Muslim nations which would “give a new impetus to economic, trade and cultural relations”.

“President Morsi’s decision to choose Pakistan as the first South Asian country for a bilateral visit manifests Egypt’s desire to add a new chapter to its bilateral ties with Pakistan,” the ministry added.

Officials from the two countries signed agreements to promote cooperation in shipping, investment, information technology and science and technology.

“President Morsi expressed his deep desire to cultivate close relations with Pakistan and stated that Pakistan and Egypt are two pillars of the Islamic world,” Babar said.

Late Monday Morsi is due to travel to India, where he will meet with Prime Minister Manmohan Singh and business groups to bolster a blossoming trade relationship.

“We talk often in general terms about space, technology and cooperation but during this visit we are talking in specific terms about launching an Egyptian satellite,” he added.

Egypt is struggling to restore investor and foreign lenders’ confidence after suffering a sharp economic decline since the uprising that overthrew president Hosni Mubarak in February 2011.

Morsi’s administration has been plagued by unrest and deadly clashes between protesters and police, blocking efforts to build broad-based support for a needed program of economic reform.