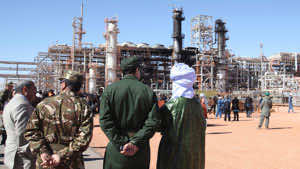 At least one Canadian was among the Islamist fighters killed in an attack on a desert gas plant in Algeria in mid-January, federal police said Monday.

Officials are investigating reports that another Canadian was also among the fighters.

Al-Qaeda linked fighters took hundreds of hostages when they raided the In Amenas plant in Algeria on January 16. Thirty-eight hostages and 29 fighters were killed during a siege and rescue attempts by the Algerian army.

Canada had asked Algeria for proof to back up a claim by Algerian Prime Minister Abdelmalek Sellal that another Canadian was also among the dead fighters.

RCMP officers flew to Algeria in January to investigate any ties between the hostage takers and Canada.

An Algerian security source, meanwhile, has said the two Canadians were “Arabs with dual nationality.”