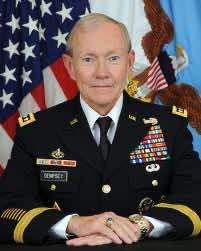 The United States is struggling to track a fragmented Syrian opposition and has found it increasingly difficult to get a clear picture of rebel factions, the US military’s top officer said Monday.

“About six months ago we had a very opaque understanding of the opposition and now I would say it’s even more opaque,” General Martin Dempsey , chairman of the Joint Chiefs of Staff , told the Center For Strategic and International Studies (CSIS), a Washington -based think tank.

His comments reflect the dilemma faced by President Barack Obama as he weighs how much assistance to provide to the Syrian opposition, which has been battling President Bashar al-Assad’s regime for more than two years.

Top US diplomat John Kerry on Monday said the United States would not oppose moves by some European countries to arm Syrian rebels, but Washington has so far opted against sending weapons to the opposition amid fears they could end up in the hands of Al-Qaeda linked militants.

National Intelligence Director James Clapper told a Senate hearing last week that as the rebels have grown stronger extremist elements aligned with Al-Qaeda had “gained strength, both numerically and otherwise.”

Last month, Dempsey and Leon Panetta , then US defense secretary, acknowledged that they had endorsed a proposal to arm the Syrian rebels but said the White House vetoed the idea.

Panetta told lawmakers that former CIA director David Petraeus and former secretary of state Hillary Clinton also had backed the move to supply arms.
Syria’s rebel chief Selim Idriss sought to reassure Western countries on Monday, saying he could guarantee that “these weapons will not fall into the wrong hands.”

The United States so far has provided non-lethal and humanitarian aid to the Syrian opposition.