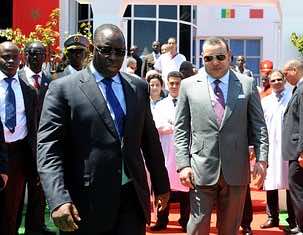 King Mohammed VI and Senegalese President, Mr. Macky Sall, expressed their satisfaction with the adoption, under the Moroccan chairmanship, of resolution 2085 of the Security Council, “which defined a clear and articulated strategy to enable brother Mali recover its national sovereignty and territorial integrity and to restore constitutional order. “

“In the same context, they commended ECOWAS for its pioneering commitment to the side of Mali, its overall accurate and relevant appreciation of the situation, its dynamic mobilization at the international level and, finally, its ability to react promptly and pragmatically,” said a joint Moroccan-Senegalese communiqué released Tuesday in Dakar at the end of the official visit of King Mohammed VI to Senegal.

“They also welcomed the efforts of France and the international community to help Mali recover its sovereignty over all its territory,” the statement added.