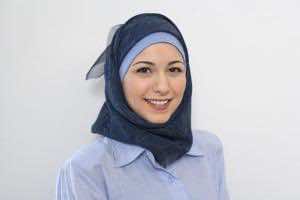 Many Muslim women choose to cover their hair and are not pushed to do so by their fathers or husbands.

Scholars of Islam and the religion’s many followers contend that Islam promotes honor and dignity among women, despite stereotypes about the religion and some negative cultural practices around the world. The religion’s holy texts and practices show examples throughout history that women are valued members of society and deserve the same justice as men. The Qur’an, Islam’s holy text, even devotes an entire chapter to Meryem, or Mary of Christian theology, and Islam’s Prophet Muhammad was recorded as showing great respect for his wives and the women in his community. However, some Muslim scholars and societies have interpreted Islamic texts in ways that oppress women. As a result, treatment and expectations of women vary among cultures and schools of religious thought.

The Qur’an states in several places that men and women were created from the same being and that neither one is inferior to the other: “He created you from one soul.” (Qur’an 39:6) Many Muslims interpret Qu’ran 4:124 as meaning men and women are spiritually equal in Islam and are meant to complement one another spiritually and in daily life. “And whoever does righteous deeds, whether male or female, while being a believer, those will enter Paradise…” Islam’s Prophet Muhammad valued the leadership and intelligence of his wives and encouraged them to interact with their community. Muhammad’s first wife Khadija was a successful businesswoman who actually proposed marriage to him. She encouraged him in the early years of Islam, and it is documented that the Prophet looked to her for guidance and support.

In Islam, women are permitted to initiate divorce and own property and are also due their share of inheritance. When Islam began to spread across Arabia in the eighth century, these practices were unprecedented in this region and in Europe. However, Islam does maintain protective attitudes towards women. These stem from a view that women are more vulnerable than men in some situations and deserve their protection for safety reasons. Islam also acknowledges that men are easily distracted by women and are likely to behave inappropriately with them if given the chance. For this reason, women pray behind men in the mosque, or place of worship for Muslims. This setup ensures that neither side is distracted by the other. Although some scholars of the Hanafi school of Islamic law discourage women from attending mosques, many quotes from the Prophet Muhammad stated that no one should prevent women from praying in congregation.

The issue of headscarves and women’s clothing exemplifies the varying, and sometimes extreme, interpretations of Islamic law. Many Muslim women and men choose to interpret the Islamic texts as mandating or suggesting that women cover their hair. However, millions of Muslim women practice their religion worldwide but do not cover their hair outside of the mosque. Scholars have differing interpretations of a Qur’anic verse that refers to women’s modesty as well, some stating that the verse requires veiling and others stating that the verse only requires modest dress: “Say to the believing women that they should lower their gaze and guard their modesty; that they should not display their beauty and ornaments except what ordinarily appear thereof; that they should draw their veils over their bosoms….” (Quran 24:30,31) According to Ann Sofie Roald, author of “Women in Islam: The Western Experience,” Islam, the Qur’an and its reputable holy texts do not support such cultural practices as female circumcision, domestic violence or oppression of women. However, in some countries, Islamic scholars have interpreted the law to endorse pre-Islamic cultural practices such as female circumcision, which most scholars agree is not “Islamic.”

Non-governmental and religious organizations around the world, such as the United Nations and the U.S Agency for International Development, try to educate communities, like those under Taliban rule in Afghanistan and Pakistan, that such harmful attitudes, such as preventing girls from attending school, hurt or demean women. Other organizations, such as Islamic universities and think tanks, strive to educate Muslims about which practices are truly “Islamic” and which are merely cultural. While countries like Saudi Arabia prohibit women from driving or traveling without a guardian, many Muslim-majority countries promote increased literacy among women and encourage women to join positions of political power and to take leadership roles in their communities.