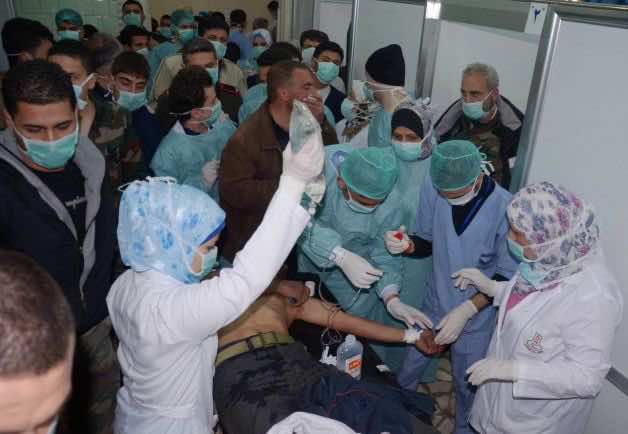 Syria’s government and rebels accused each other of launching a deadly chemical attack near the northern city of Aleppo on Tuesday in what would, if confirmed, be the first use of such weapons in the two-year conflict.

U.S. President Barack Obama, who has resisted overt military intervention in Syria, has warned President Bashar al-Assad that any use of chemical weapons would be a “red line”. There has, however, been no suggestion of rebels possessing such arms.

The most notorious use of chemical weapons in the Middle East in recent history was in the Iraqi Kurdish city of Halabja where an estimated 5,000 people died in a poison gas attack ordered by former Iraqi President Saddam Hussein 25 years ago.

No Western governments or international organisations confirmed a chemical attack in Syria, but Russia, an ally of Damascus, accused rebels of carrying out such a strike.

Syria’s deputy foreign minister, Faisal Meqdad, said his government would send a letter to the U.N. Security Council “calling on it to handle its responsibilities and clarify a limit to these crimes of terrorism and those that support it inside Syrian Arab Republic”.

He warned that the violence that had engulfed Syria was a regional threat. “This is rather a starting point from which (the danger) will spread to the entire region, if not the entire world,” he said.

The United States said it had no evidence to substantiate charges that the rebels had used chemical weapons.

U.N. spokesman Martin Nesirky said it was not in a position to confirm the reports, adding that if either side used such weapons it would be a “grave violation of international law”.

Britain said its calculations would change if a chemical attack had taken place. A Foreign Office spokeswoman said it would “demand a serious response from the international community and force us to revisit our approach so far”.

A Reuters photographer said victims he had visited in Aleppo hospitals were suffering breathing problems and that people had said they could smell chlorine after the attack.

“I saw mostly women and children,” said the photographer, who cannot be named for his own safety.

He quoted victims at the University of Aleppo hospital and the al-Rajaa hospital as saying people were dying in the streets and in their houses.

The revolt against four decades of family rule started with peaceful protests two years ago but descended into a civil war after Assad’s forces shot and arrested thousands of activists and the opposition turned to armed insurgency.

Assad is widely believed to have a chemical weapons arsenal.

Syrian officials have neither confirmed nor denied this, but have said that if it existed it would be used to defend against foreign aggression, not against Syrians. There have been no previous reports of chemical weapons in the hands of insurgents.

Information Minister Omran al-Zoabi said rebels fired “a rocket containing poison gases” at the town of Khan al-Assal, southwest of Aleppo, from the city’s south-eastern district of Nairab, part of which is rebel-held.

“The substance in the rocket causes unconsciousness, then convulsions, then death,” the minister said.
But a senior rebel commander, Qassim Saadeddine, who is also a spokesman for the Higher Military Council in Aleppo, denied this, blaming Assad’s forces for the alleged chemical strike.

“We were hearing reports from early this morning about a regime attack on Khan al-Assal, and we believe they fired a Scud with chemical agents,” he told Reuters by telephone from Aleppo.

Washington has expressed concern about chemical weapons falling into the hands of militant groups – either hardline Islamist rebels fighting to topple Assad or his regional allies.

Israel has threatened military action if such arms were sent to the Syrian- and Iranian-backed Lebanese Hezbollah group.

Zoabi said Turkey and Qatar, which have supported rebels, bore “legal, moral and political responsibility” for the strike – a charge dismissed by a Turkish official as baseless.

Zoabi told a news conference that Syria’s military would never use internationally banned weapons.
“Syria’s army leadership has stressed this before and we say it again, if we had chemical weapons we would never use them due to moral, humanitarian and political reasons,” he said.

Syrian state TV aired footage of what it said were casualties of the attack arriving at one hospital in Aleppo.

Men, women and children were rushed inside on stretchers as doctors inserted medical drips into their arms and oxygen tubes into their mouths. None had visible wounds to their bodies, but some interviewed said they had trouble breathing.

An unidentified doctor interviewed on the channel said the attack was either “phosphorus or poison” but did not elaborate.
A young girl on a stretcher wept as she said: “My chest closed up. I couldn’t talk. I couldn’t breathe … We saw people falling dead to the floor. My father fell, he fell and now we don’t know where he is. God curse them, I hope they die.”

A man in a green surgical mask, who said he had been helping to evacuate the casualties, said: “It was like a powder, and anyone who breathed it in fell to the ground.”

A rebel fighter in Khan al-Assal, about 8 km (5 miles) southwest of Aleppo, said he had seen pink-tinged smoke rising after a powerful blast shook the area.

Ahmed al-Ahmed, from the Ansar brigade in a rebel-controlled military base near Khan al-Assal, told Reuters that a missile had hit the town at around 8 a.m. (0600 GMT).

“We were about 2 km from the blast. It was incredibly loud and so powerful that everything in the room started falling over. When I finally got up to look at the explosion, I saw smoke with a pinkish-purple colour rising up.

“I didn’t smell anything, but I did not leave the building I was in,” said Ahmed, speaking via Skype.

“The missile, maybe a Scud, hit a regime area, praise God, and I’m sure that it was an accident. My brigade certainly does not have that (chemical) capability and we’ve been talking to many units in the area, they all deny it.”

Ahmed said the explosion was quickly followed by an air strike. A fighter jet circled a police school held by the rebels on the outskirts of Khan al-Assal and bombed the area, he said.

Ahmet Uzumcu, head of the Organisation for the Prohibition of Chemical Weapons, said in Vienna he had no independent information about any use of such arms in Syria.

Security forces have reinforced the centre of the capital – home to state offices and the residences of government officials – but rebels pushing into the outskirts of Damascus are staging increased attacks on districts in the heart of the city.

Syrian rebels said on Monday they had fired mortar bombs at the presidential palace, Damascus International Airport and security buildings to mark the second anniversary of the uprising that has left at least 70,000 dead.

A government-run station, Addounia TV, said “terrorists”, a term Assad’s supporters use for the rebels, fired bombs at “civilian areas of Damascus, including near the Saudi embassy”. It said there were casualties but gave no details.