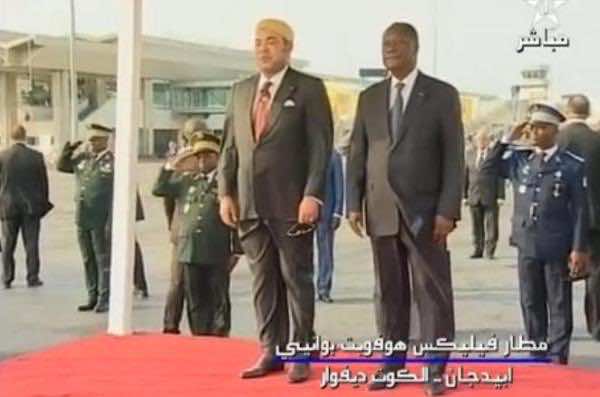 “I should like to reiterate Morocco’s firm determination to build, together with the sister nation Cote d’Ivoire, a fruitful and prosperous model which embodies South-South cooperation in Africa, for the progress and well-being of our peoples,” the King said in a speech during the official dinner offered by Ivorian President, Alassane Outtara.

The King expressed hope to bolster positive political consultations on fundamental issues pertaining to collective security and stability in the Maghreb region and Western Africa, whose “strategic interests are inseparable”.

The King, who noted his visit to Cote d’Ivoire, shapes a project for a shared future, said it is up to the two countries to maintain and cement the indissoluble bonds which unite them, in order to give this fraternity the brightest, most tangible illustration.

“We have a duty to deepen our cooperation and upgrade it on renewed foundations, in order to tackle the challenges ahead and turn our partnership into real opportunities for trade, growth and progress for the benefit of our two countries,” the King said.

In this respect, the King described the involvement of the Business Community as a “determining factor for growth and employment, and for the reinforcement of our partnership,” noting with satisfaction that since 2011 Moroccan companies and groups have been setting up business and investing in Cote d’Ivoire, which is back on the path to sustainable growth.

“Confident that, thanks to our joint determination, the momentum will be kept up for the years ahead,” the King said he has decided to devote special attention to the human dimension, which is the cornerstone of cooperation between Morocco and African sister nation.