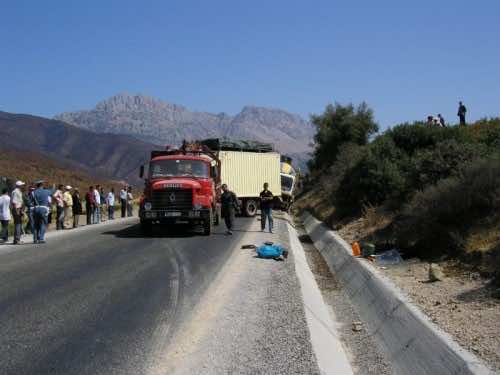 What would be the most recurrent topic today that people in foreign countries allude to whenever the word ‘Morocco’ pops up in their conversations? Is it Morocco’s beautiful touristic sites? Is it Morocco’s distinctive dishes? Or is it Moroccans’ accomplishments in sports?

In fact, all of the above topics once typically associated to Morocco are outdated today. Can you guess which ‘hot issue’ substituted them? It is road tragedies in Morocco! Almost no week elapses without us hearing of two or more accidents having taken place here or there, because of either a driver’s sleep deprivation or a road’s lamentable condition. Whether we are going to top the list of countries with the highest number of car crashes per year is more of a project now than a probability. Worse, our now daily exposure to news of car crashes and road victims in Moroccan media has awkwardly accustomed our ears and eyes to such tragedies, in such a way that they are rendered ‘commonplace’ news in Morocco.

Two mournful tragedies have been recently shared on MWN: five young individuals lost their lives on the way to join their friends on the other side of the road and seven passengers died in a hideous bus accident. If one would pay analytical attention to the public’s reaction to these sort of news now, and contrasts it to the reactions generated perhaps years ago, when car crashes were still ‘fashioned tragedies’, one would remark that those reactions have decreased both in number, in size and also in emotional involvement. Car crashes in Morocco have indeed become as commonplace as the customary popcorn man who passes by one’s house on every ordinary day, and sells the same kids the same product.

Since little or nothing can be done in the aftermath of a saddening car crash, we thus turn back to realize that the solution can be ignited right before the tragedy. How many drivers expect being the victims of a car crash whilst, for instance, heading to their houses in another city in Morocco? Yes, expectation is the very first way to minimize the chances of being a victim of a road tragedy. If you cling to your mind the idea that anything is possible on a Moroccan road, your vigilance whilst driving increases dramatically. And with such expectation accompanying you along the road, you refrain from any irresponsible, risky or childish act. You can also become more aware of what is going on around you while you are driving. Being a person who strictly respects the Highway Code does not forcibly mean that the individual driving on your right does respect it too. So you also need to keep an eye on what is going on around you.

There is no harm reminding you of things you might have got frequently exposed to before, during and after your endeavor to get a driving license, things that have become so repetitive for you that you have relegated them to mere banalities. Those very things, however, are the same banalities that induce your car to wind up out of the road when not respected. So if you are going to read the road tips in this article, close the tab, and then open Youtube in a new tab to listen to your favorite hit as if nothing has been said, then you really are looking forward to a road tragedy.

You are not a racer!

Are you being chased by the driver in the movie “The Transporter”, or by the bunch of insane drivers in “Fast and Furious”, or by “Godzilla” the enraged dinosaur whilst driving your car on the road? Take it slow! You really are reaching your destination as long as you do not drive as if you were one of those insane racers in one of those adrenaline-booster movies. Repeat after me me: I am not a racer, and I want to stay alive!

Are you pretending to be blind?

Why do you think those signs have been placed on the edges of the road if you, alongside other drivers, are not considering having a laconic glance at them? Why do you think people who are applying to get a driving license end up the next week surrounded with books detailing the same signposts you repeatedly overlook while driving on the road? Are you pretending to be blind, or have you learnt all signposts by heart that you can guess which one is coming next without really having to look at it. Say after me: Look at the signposts! Look at the signposts!

Unless you are driving the biggest truck on earth, which obviously might take over the entire road because of its colossal size, you need to step aside just like any other driver on the road. It was made to allow people to pass, not to jail everyone behind your small car while you are driving right in the middle of the road. No surprise if one of the drivers behind you would get so enraged that he would push your car from behind just to compel you to move aside. You know what happens next…

What were you doing last night?

Do you think the best place and time to have a nap is right in the middle of the road while you are driving at an insane speed? What were you doing last night when other drivers were having rest in preparation for their long car trip the next day? Were you reading a book entitled How to Sleep While Driving, by the author “Kill Yourself.” If you do not want to wake up in a hospital missing a part of your body, or not wake up at all, then please have enough sleep before you hit the road the next day.

Your car is your baby!

Do you change your baby’s diapers regularly? Do you feed your baby regularly? Do you give a bath to your baby regularly? Of course you do! Then why do you neglect your car? It does need as much attention, love and care as your baby does. Why? Well, because your car will take care of you later on the road. If you do not check the needs of your car, the latter will surely let you down in the middle of the road or render you one of the names among the last of road causalities in tomorrow’s midnight news.

Those road tips above are only a few among a myriad of others. Do not close your ears to warning calls everywhere. Why not stay safe if it is your life that becomes at stake when you are driving? Why do we value our lives only after someone is lost, or a damage befalls us? If it is not your life that you are putting in danger, then it is maybe the life of your daughter’s future husband, or that of a boss that will promote you in the future after replacing your current one. Look at it this way, and you will surely think twice before being irresponsible on the road.

As to the list of tips that shall be addressed to the government concerning the condition of roads in Morocco, it is more of booklet of tips that should be written in this regard. If Moroccan roads, which are some of the main factors behind our road tragedies, are not given the care they necessitate, then why being surprised that the same roads do not take care of our citizens?