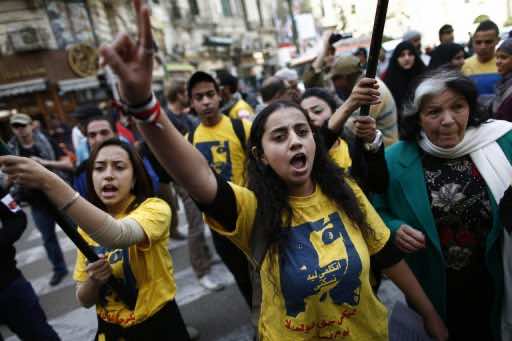 I would start by stating the famous claim: it’s the rudimentary mentalities of men that are getting in the way of gender equality! It is a fair fact to claim that men’s attitudes towards women are thoroughly cultural, and can be destructive of any possibility to ever consider the subject through the lens of a woman’s individuality. Yet, we have to bear in mind the cultural and religious background that shapes Arab societies in order to place it in the context of current controversies.

These attitudes are never to change. Instead, they may be wrapped up in a corner, conserved perfectly for the same cultural causes. As a matter of fact, and as Neitzche claims, those fixed attitudes are actually a product of a male’s desire. Therefore, desires that would enable the timeless, forever fixed notions about women to remain the same; notions such as the inferiority, instability, and unreliability of women, only to say the least.

Through generations to come, everything changes but women’s identity. This is so, even during the period of greatest change. Women remain their characterization of being weak, inferior and disgraceful. Whenever they utter to speak, they’re being rejected in the excuse of knowing less, or at worse, knowing nothing.

Yet recently, and thanks to many worldwide organizations, women’s rights have been achieved, and their status altered. Nonetheless, and despite all the fighting for women’s rights and equality, and efforts to defending women from domestic and verbal violence and so on, we see these attitudes continue. Some call it “subversive immorality,” accusing modernism to have brought such subverting claims and demands in the form of UN documents demanding global standards. The Muslim brotherhood in Egypt has shamelessly accused UN WOMEN (the UN agency that focuses on women issues) of being destructive of established norms. Moreover, the sequel of accusation is further stretched as to claim that such documents’ main focus is to guarantee a “go back” to the pre-Islamic ignorance.

I see absolutely no problem with one’s attempts to preserve religion. But if that attempt is going too astray as to prevent women from obtaining their fair rights, well, excuse my feminine urges, I have to disagree. As a matter of fact, I see the necessity of expounding on my interpretation of such a reaction. Accusing UN WOMEN of provoking pre-Islamic ignorance is invisible, if not unimpressive for me, for there’s absolutely nothing wrong about the way this UN agency seeks to standardize various demands and rights in a way that can be applied to almost all religions. Islam, among other religions, has been always the pioneer in giving women all the rights and prerogatives they need in an ever-changing world. Furthermore, and if these same rights promoted by this global organization seems slightly altered, it’s for the sake of accompanying modern changes and definitely not some backward ones.

Coming back to the momentum from Arab World uprisings, women are constantly present. Whether in the milieu of struggle or in the margins, their contribution is noticeable. They were screaming, demanding, marching, and leading. At times, they’re nursing, supporting, backing and reviving lost motivation. More than that, they were as well part of the bleeding; some died protesting, some lost their loved ones, and some have been tortured or kidnapped, swept away by the armies. They bore the burdens of the uprisings as mothers, sisters, daughters and widows. Yet deep down, they were not only fighting for freedom of their countries, but for their own freedom within their countries. Thus, the Arab revolution might end, but the women’s revolution is never over.

The Muslim brotherhood was elected by men and women, and now they’re returning the favor to the latter! And instead of bringing justice to Egyptian women, they’re rejecting the standardization of women’s rights based on fragile excuses. Through such doings, I believe the Muslim brotherhood is denying the rest of Arab women the same rights, and even encouraging social patriarchy as well. Shockingly enough, religion is used as an excuse, when it was once an inspiration for such rights espoused by UN WOMEN. I believe the Egyptian brotherhood is merely escaping the question of women’s participation in the political sphere in the new Egyptian state.

Witnessing such incidents brings me back to the starting point: men’s mentalities and cultural attitudes. Honestly speaking, highly educated political leaders or a shadow in the dark male; there is no difference at all.

With all due respect to all men, this fact is never going to change. The simple inclination that women are inferior is of enough influence to forever think that men are never to rub shoulders with women, let alone open up a political space for them in the newly born democratic countries, the so-called revolutionary legacies!