King Mohammed VI and Cote d’Ivoire’s president Alassane Dramane Ouattara chaired on Tuesday in the presidential palace in Abidjan the signing ceremony of six bilateral cooperation agreements providing for the reciprocal encouragement and protection of investment, fish and aquaculture, air services, vocational training in tourism, civilian protection and a memorandum of understanding between the two countries’ foreign departments.

The agreements, designed to give a strong impetus to bilateral partnership, illustrate the two heads of state’s resolve to promote and consolidate cooperation between the two countries and peoples, united by ancestral ties of friendship and brotherhood.

Despite their constant progression, trade exchanges remain “below the real potentials of the two countries and the quality of their cooperation”, notes a joint communiqué released Wednesday on the occasion of the official visit that King Mohammed VI is paying to Cote d’Ivoire.

The two African countries took note of “the numerous opportunities offered by their economies”, and stressed the need to “consolidate a mutually-beneficial cooperation”, says the communiqué which also encourages the two countries’ private sectors to “further intensify their efforts with the aim of establishing a win-win partnership”.

Cote d’Ivoire submitted to Morocco a series of agreement projects in the field of justice, tourism and decentralization.

On its part, Morocco proposed to the West African country cooperation agreement projects in the fields of ports and sea transport, industrial cooperation, management and integrated development of water resources of human zones of the littoral.

These projects will be examined during the upcoming session of the grand joint cooperation commission to be held in Abidjan very shortly, says the communiqué. 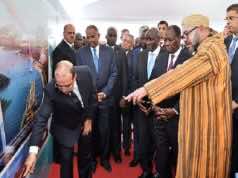 $450 Million for a Moroccan Project in Cote d’Ivoire