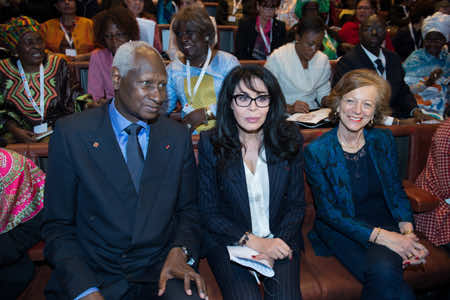 The first Global Forum of Francophone women opened on Wednesday, March 20th in Paris with the participation of more than 400 women from civil society from around the world, including 77 French-speaking countries, including Morocco. The purpose of this meeting is to bring solutions to stop the decline of women’s rights in many parts of the world and particularly in the Francophone world.

The World Forum of Francophone women has the “ambition to set the foundations of a new status of women in the Francophone world and defend their rights wherever they are threatened” said the French Minister in charge of ‘La Francophonie,’ Yamina Benguigui, in her opening statement to the forum.

This forum brings together engaged women who “lead daily struggles to protect their fundamental rights, access to school and education, gender equality, women representation in the political spheres” and permits these women to “share their stories and offer all together an action plan for Francophone women.” It also aims to create an active network of militant women to mobilize for women rights in the Francophone world and beyond.

This forum whose conclusions will be submitted to the French president, François Hollande and the Secretary General of the Francophonie Abdou Diouf, was articulated around three roundtables: “Protecting women: how to stop the violence and ensure the rights?” “Building the future: how to best ensure girls’ education and literacy in higher education?” and “Women for Economic development.”

The organization of this forum came as a reaction against the regression witnessed in women’s rights in the world and particularly in the Francophone world. In her opening statement, Yamina Benguigui noted that the idea of ??this forum was born out of indignation. “In the Arab countries, where there were popular revolutions, attempts were made to subject women’s rights. The Francophone world in general is affected,” She said.