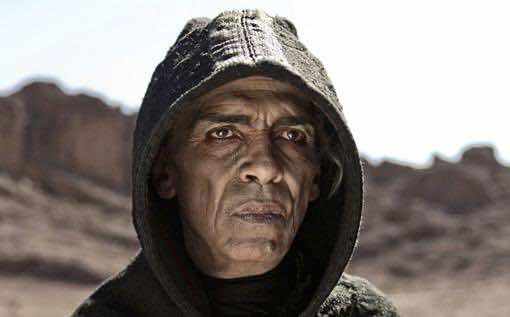 Many spectators who caught a glimpse of the picture of the Antichrist (the Bible’s Satan) in the History Channel’s “Bible” mini-series have admitted that he resembles president Obama. Yet, Christa Schoeman, makeup artist for Moroccan actor Mehdi Ouzaani who plays Satan in the series, claims otherwise, saying that there is no relation between the Bible’s Satan and President Obama, according to the International Business Times

Dispelling doubts about the resemblance, Schoeman said, “There was not an inch of thought about President Obama in my head at any time.”

“I can guarantee that President Obama had nothing to do with it in any shape or form,” she added.

The rumor of resemblance quickly spread on Twitter Sunday night after the Satan character appeared on the History Channel series.

The news soon sparked such uproar that the film’s executive producers instantly intervened to describe the statements as utterly nonsensical.

In this context, Mark Burnett and Roma Downey, executive producers, responded by stressing, “the actor who played Satan, Mehdi Ouzaani, is a highly acclaimed Moroccan actor. He has previously played parts in several Biblical epics—including satanic characters long before Barack Obama was ever elected our president.”

“Nothing but respect and love for our president, who is a fellow Christian,” Downey added, attributing the “foolish” statements to the disrespect some people show towards the Bible.

A reader on the Daily Beast website insists on the connection, commenting, “Then it was sub-conscious. What does she think…that we are blind?” Another person who commented added, “Sorry, not buying it. When so many people immediately see it, including Glenn Beck of all people, the denials will never be believable.”