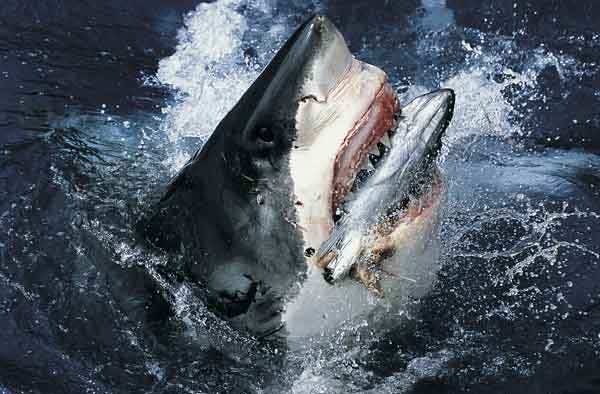 US research from the 1980s estimated a 30 kilogram (66 lbs) meal of mammal blubber could sustain a one-tonne shark for more than six weeks.

That perpetuated assumptions that large sharks could survive long periods without eating.

However, a University of Tasmania-led study published this week in Scientific Reports on the nature.com website found that 30 kilos was only enough for 12-15 days.

They worked out how much energy the sharks burned and how much food they required.

Senior research scientist Jayson Semmens, lead author on the study, said the amount of energy required by great white sharks was equivalent to eating a seal pup every three days.

“They (US researchers) picked a shark that probably wasn’t working very hard at the time when they did it,” Semmens told ABC television.

“At the time it was a really novel study. They did some metabolic work similar to us but on one shark.

“The white sharks at a seal colony where we worked, they’re working pretty hard, … they’re coming up to some pretty high speeds to catch the seals.

“Their metabolic rate or the engine that runs them is much faster than what we had assumed.

“These animals are probably going to be feeding you know every few days, rather than multiple weeks.”

The research also sought to improve understanding of how sharks fit into the ocean ecosystem.

“We don’t have a good handle on the population sizes of white sharks. We know that sharks in general are under pressure around the world from overfishing,” he said.

“They’re quite vulnerable because of their life history, they’re long-lived, they reproduce late in their life and they produce a small number of offspring.”

Semmens said the knock-on effects of removing white sharks from the ocean were thus far more important than realised.

“They’re keeping under control a lot more animals than we thought,” he said.

The apex marine predators, which grow up to five metres (yards) long and weigh an average 1,300 kilos, are protected and found around the globe.