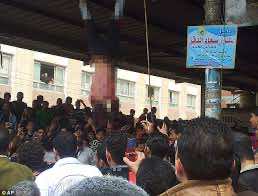 Egyptian villagers lynched a suspected car thief on Thursday, security sources said, in the latest in a spate of such vigilante killings in the face of growing lawlessness.

The lynching, in the Nile Delta village of Ezbat al-Gindy, came days after residents of another village strung up two suspected criminals in an incident described by the justice minister as a sign of the “death of the state”.

A police official said 17 such killings have occurred just in Sharqiya province, where Ezbat al-Gindy is located, since a 2011 uprising overthrew president Hosni Mubarak and took a severe toll on his security services.

The official said the man hanged from a tree in the Ezbat al-Gindy had tried to steal a car, whose owner appealed to passersby for help.

The bodies of those lynched are publicly displayed to serve as a warning to others, amid rising crime rates and a decreased police presence.

On Sunday, villagers in Mahallat al-Ziad beat two men accused of kidnapping a girl and strung them up in a public square. Footage of the lynchings was widely circulated on the Internet.

The spread of such vigilante justice “is one of the signs of the death of the state,” Egyptian newspapers quoted Justice Minister Ahmed Mekki as saying after the Mahallat al-Ziad lynchings.

The latest killings came as police ended a weeks-long strike, during which they complained they were ill-equipped to deal with violent criminals and protesters. They have been promised more weapons.

A hardline Islamist group recently said its members would take up policing duties in the central province of Assiut because of rising crime and insecurity. It has since bactracked after a public backlash.

But in many rural areas, residents have often been left to fend for themselves because of a delayed response by police.