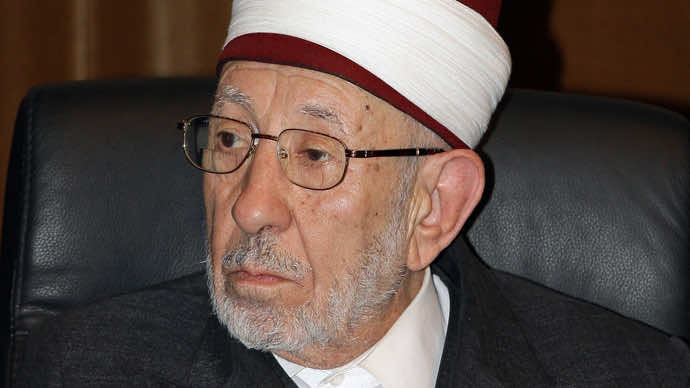 A suicide bomber targeted a mosque in central Damascus on Thursday, killing a senior pro-regime Sunni cleric and at least 14 other people, Syrian state media and a watchdog reported.

“Senior cleric Dr Mohammed Saeed Ramadan al-Bouti was martyred in a terrorist suicide attack at the Iman Mosque in Mazraa in Damascus,” the channel said, adding there were reports of more dead and wounded.

“Bouti was martyred while he was giving a religious lesson to religion students in the Iman Mosque,” the station added.

The Syrian Observatory for Human Rights said at least 15 people were killed in the attack in addition to Bouti, with dozens more wounded at the mosque in Mazraa, a district just north of the city centre.

State news agency SANA said at least 14 people had been killed in addition to Bouti, and more than 40 were hurt.

The official Al-Ikhbariya television station aired gruesome footage from inside the mosque, where dozens of corpses and body parts, including limbs and hands, were strewn on the carpeted floor.

The footage showed emergency workers collecting the remains from inside the mosque and carrying them out in grey body bags.

A presenter on the channel said a suicide bomber had entered the mosque and blown himself up.

Bouti was the most senior pro-regime Sunni cleric in Syria, and his weekly addresses at Friday prayers were frequently broadcast live on state television.

After news of the attack broke, one state television station interrupted its regular programme to broadcast verses from the Koran, the Muslim holy book as well as footage of Bouti giving his weekly sermon.

Bouti, who comes from a major Kurdish family, was reviled by the opposition, and activists say he was forcibly ejected from a mosque in 2011 after saying most of the people who went out to protest after Friday prayers did not know how to pray.

He was born in 1929 and spent years studying Islamic theology, including at Cairo’s al-Azhar University, according to state television.