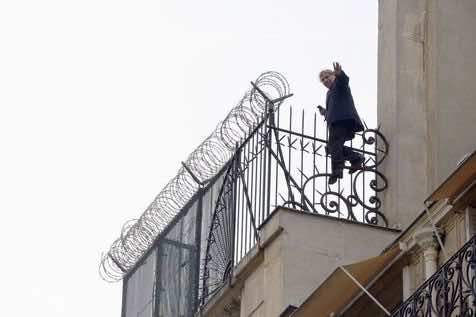 According to Agence France-Presse journalists, a man who identifies himself as “poet-climber” managed to climb Thursday afternoon, March 21st on the roof of the embassy of the United States in Paris before being taken down by firefighters.

Hervé Couasnon told AFP by telephone from the top of the building located in “Place de la Concorde,” that he wanted “to meet Barack Obama,” give him “his resumé” and talk to him “about peace.” The moment Hervé Couasnon was at the top of the embassy, the U.S. president was in Ramallah, in the West Bank.

The man spent nearly two hours on the roof of the US embassy. Dislodged at around 3: 30 p.m. by firemen who used a ladder, the man went down without any resistance under the surprised eyes of dozens of tourists and onlookers. Hervé Couasnon was, then, taken to SAIP (service reception and investigation of proximity) of the 8th district for investigation, as revealed by police sources.

The US embassy in Paris and its surroundings are highly secured, especially because of its proximity to the Elysée that it is located in one of the districts that are highly surveyed in Paris. The US embassy denied this incident in a statement to AFP. Mitchell Moss, the US embassy spokesman, said that the man “was on the roof of an adjacent building separated from the embassy by a barrier that he has never crossed.”

It should be noted that this is not the first time Hervé Couasnon places himself under the spotlight; he had already done something similar when he broke into the nuclear center of Civaux (Vienne). In August 2003, the “poet-climber” had already been arrested on rooftops near the Embassy of the United States when he was throwing leaflets.

The same year, on October 5th, he was found perching on the signboard of the palace Le Negresco in Nice, and on November 10th he was found on the edge of the tower of the Town Hall of Rennes, reading poems of his composition to the passersby.