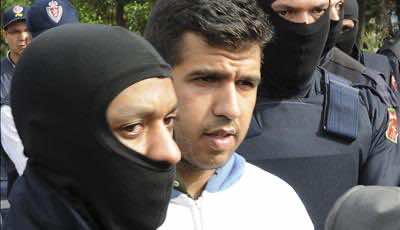 The main suspect in the bombing of Argana Café in Marrakech Adil Al-Othmani who is a detainee in the prison Moul El-Berkin in Safi requested the execution of the death penalty against him.

In a written letter to the royal cabinet entitled “a request to the king Mohamed VI” he called for the execution of the death penalty which “will put an end to his plight” as he explains in his letter.

“By virtue of what I and my family suffered so far, both in terms of my miserable conditions in prison or the lies being said about me in newspapers and the media, the last of which was the lie that I own an Iphone that I use to prepare for other bombings from behind the bars,” he requested that the king give his orders to execute the death sentence passed against him by firing squads.

In October 2011, the Moroccan judiciary sentenced Adil Al-Othmani to death penalty for his alleged involvement in the bombing of Argana Café in Marrakech in late April 2011. The tragic event resulted in the death of 17 people, while 21 people were wounded.

It’s worth mentioning that the last death penalty was executed in Morocco was in September 1993 against the police officer Mohamed Mustapha Tabet (known as Haj Tabet) for his sexual crimes against 1600 Moroccan women.