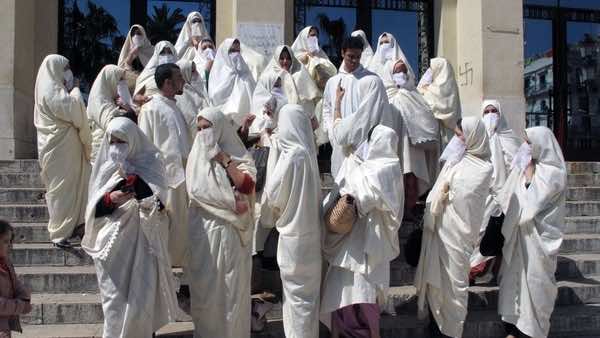 Covered from head to toe in white, their faces partly masked by embroidered triangular cloths, Algerian women marched through the capital Thursday to defend their traditional Islamic dress.

“We want to sweep away these clothes which come from Saudi Arabia, black, sad and stifling under the sun, to return to our traditional ‘haik’ which is the pride of Algerian women,” said one, posing in front of the landmark central post office in Algiers.

The procession, part of a workshop organised by art student Souad, gathered around 30 participants at the foot of the Casbah, not far from the post office, where they all cheerfully removed their veils.

“I want to give the haik its real value and this is my second attempt to do so,” said Souad, a painter who normally does not wear the veil but who remains determined to defend her country’s traditions.

“Long live Algerian Algeria, this is a part of our culture,” said a veiled passer-by, her head covered in a burgundy scarf, adding: “The black thing, that is totally alien.”

Rim, whose face was covered by a triangular silk “aadjar” that her grandmother embroidered agreed.

“It is unfortunate that we’ve had the hijab imposed on us since the 1990s, it is not a part of our tradition,” said the young woman in her 20s.

“Sure, the haik has Turkish origins, but it was with us for centuries,” she added, referring to the more than 300 years prior to French colonial rule when much of Algeria was a part of the Ottoman empire.

Today in Algiers, it is rare to see the traditional garment worn, except occasionally by old women.

Often the triangular cloth is a carefully crafted jem of lace work, while the traditional robe ranges in colour from pure white to cream, with silk versions worn by the more affluent Algerians.

Amal, in her 30s and wrapped in a black scarf, watched from a distance as the procession of white women marched through central Algiers applauded by onlookers.

“Well fine if the haik comes back into fashion,” she said with a smile, “but it’s only the old women who wear them now.”

Young Algerian women went mostly uncovered before the 1990s, but started wearing the veil under pressure from Islamists during the “black decade,” when an Islamist insurgency and its repression brought the country to its knees.

Since then, the veil has become fashionable in some circles, coming in all different colours, and folded in many different ways to cover the neck and hair.

Many young women are not shy about using bright makeup, even though they are expected to hide their hair and not attract male attention.

By contrast, the niqab or black full-face veil has also made an appearance in Algeria since the 1990s, as in many other Arab countries, with the women beneath them even wearing gloves to cover their hands, only their eyes visible.

“The hijab and the niqab are not a part of our tradition,” said Souad.

“But the haik can enhance today’s women, with its lightness and elegance.”

“Algerian women carried bombs and machineguns under the haik (during the 1954-1962 war of independence). She crossed the street carrying from one place to another these weapons that were used against the French,” he said.

And while the occupation soldiers searched Algerian men, they didn’t touch the women.