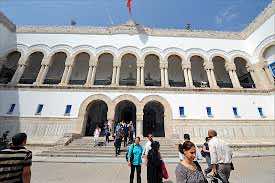 Four rappers accused of making a video clip deemed insulting to the police have been handed two-year jailed sentences in absentia, one of their lawyers said on Friday.

They were charged with “conspiracy to commit violence against” and slandering public officials, and “offending public decency,” the lawyer said, adding that he would appeal the “harsh” verdict.

Only Klibi, an actress in the video, and Belgaied Hssine, the cameraman, who were detained at the beginning of March, appeared in court, with the other defendants remaining at large.

In the video, Weld El 15 chants aggressive anti-establishment lyrics including: “Police, judges, I’ve come to tell you one thing, you are dogs,” … “I will slay a policeman instead of a sheep” and “Give me a gun, I’m gonna shoot them.”

The video can be seen on http://www.youtube.com/watch?v=6owW_Jv5ng4

One of the other rappers, “Emino,” condemned the ruling, while stressing that he had “nothing to do with” the making of the video clip, and that his name only appeared in the credits.

“We are not criminals, and no longer understand the judicial system,” he said, adding that he planned to leave Tunisia.

Tunisian artists often complain of police pressure and accuse the Islamist-led government of seeking to limit freedom of expression, citing attacks on public decency, or “on the sacred.”

A number of artists launched an appeal last week in support of the rappers, saying their trial reflected an “alarming… return to the practices worthy of a police state which the Tunisian people rose up against” in the revolution two years ago.