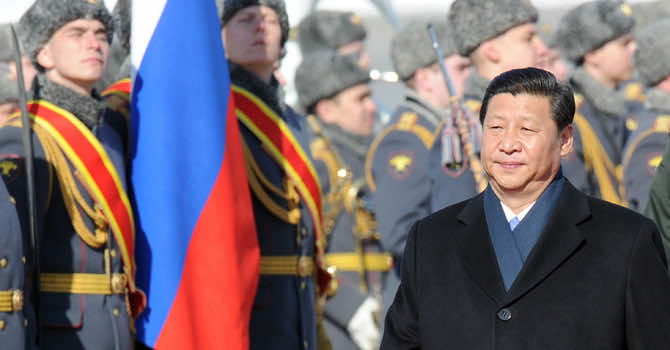 China’s new leader Xi Jinping arrived Friday in Moscow on his first foreign trip as president, to cement ties between the two countries by inking a raft of energy and investment accords.

A key deal expected to be signed between Xi and his counterpart Vladimir Putin will see Russia ramp up oil supplies to China, which is the world’s biggest energy consumer.

The Chinese leader, who arrived for a three-day visit, chose Russia for his first trip abroad after China this month completed a power handover which will see Xi preside over the world’s second-largest economy for the next decade.

Xi’s first overseas trip will then take him to Africa to shore up his resource-hungry country’s soaring influence on the continent with visits to Tanzania, South Africa and the Democratic Republic of Congo.

In Moscow Xi highlighted the importance of his country’s relationship with Russia, which is rooted in shared communist ideology.

“China and Russia are the main and most important strategic partners,” Xi said in an interview with Russian media, adding that he was looking forward to his meeting with Putin.

“In many ways we speak a common language,” he said on the eve of his Moscow trip.

Putin for his part praised the two countries’ cooperation to promote “a more just world order.”

“The fact that the new Chinese leader is making his first foreign visit to our country confirms the special nature of a strategic partnership between Russia and China,” he said in an interview released by the Kremlin ahead of Xi’s arrival.

“Essentially we are talking about a new epoch in relations between Russia and China,” said Sergei Sanakoyev, a veteran China expert with links to the Russian government.

Once bitter foes during the Cold War, Moscow and Beijing have over the past years ramped up cooperation as both are driven by a desire to counterbalance US global dominance.

At the UN Security Council, China and Russia have both vetoed resolutions to impose sanctions on Syrian President Bashar al-Assad’s regime, which is locked in a two-year conflict with the opposition.

Russia, which wants to diversify its energy markets away from Europe, needs to finalise a potentially huge gas deal which could eventually see almost 70 billion cubic metres of gas pumped to China annually for the next 30 years.

The Russian state’s natural gas giant Gazprom is likely to sign some sort of agreement although not a firm contract, said company spokesman Sergei Kupriyanov.

The commercial contract has so far proved elusive as talks have become mired in pricing disagreements.

Russia’s biggest oil company Rosneft is expected to sign an agreement to ramp up supplies to China from the current 15 million tonnes a year.

A Rosneft spokeswoman declined to comment but Rosneft chief Igor Sechin indicated that the firm could ramp up supplies to China to 50 million tonnes a year.

“China is a strategic market for Rosneft,” he told Russian media. “The goal of 50 million (tonnes a year) is not something that’s unattainable.”

“We are talking about attracting financing in the amount of $5 billion,” he told AFP, adding that projects would range from road construction to telecoms.

“They will benefit from sending the world a signal about good, strong ties with Russia,” he told AFP.

Russia and China are also members of the BRICS grouping of emerging economies, which includes Brazil, India and South Africa and which will hold a summit in South Africa next week attended by both Putin and Xi.