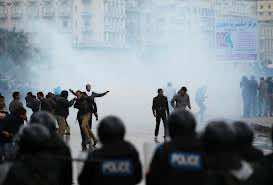 The violence erupted after activists marched to the building guarded by police and Brotherhood members. More than 120 people were hurt as the two sides pelted each other with stones, emergency services chief Mohammed Soltan told MENA.

Shots were heard as hundreds of opposition activists and the Islamists battled in the streets of the Mokattam neighbourhood where the headquarters are situated, but there were no immediate reports of gunshot casualties.

Police had fired tear gas at the protesters outside the headquarters before the clashes moved elsewhere in the neighbourhood.

Protesters captured and beat three Brotherhood members. They also smashed up an ambulance evacuating a wounded Brotherhood supporter and detained him, an AFP correspondent said.

“I came from Bilbeiss (in the Nile Delta) to protect the headquarters with my comrades,” a Brotherhood member told AFP.

Opposition activists had called for the protest a week after they battled with the Islamists near the same building in Cairo. The movement vowed on Thursday it would protect its headquarters and bused in hundreds of supporters.

The Brotherhood has seen about 30 of its offices across the country attacked in widespread protests against President Mohamed Morsi, the Islamists’ successful candidate in last June’s election.

In the Nile Delta city of Mahalla on Friday, protesters set fire to another of the Brotherhood offices, throwing petrol bombs at the building, the state news agency MENA reported.

The Brotherhood, well-organised despite decades of persecution under former strongman Hosni Mubarak and his predecessors, was the main winner of parliamentary and senate elections last year.

But its critics accuse it and Morsi of mirroring the tactics used by Mubarak against the opposition.

The Islamists clashed before with opposition activists, most notoriously in December when at least 11 people were killed in clashes outside the presidential palace after Morsi adopted extensive powers, since repealed.