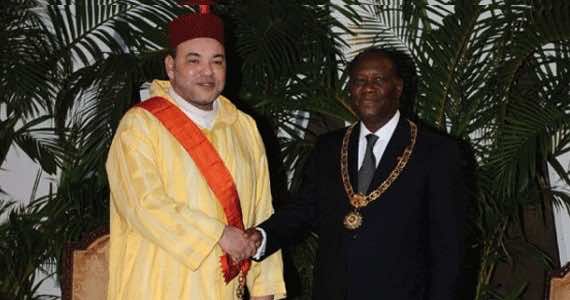 The Royal visit to Senegal, the Ivory Coast and Gabon will give new impetus to the bilateral relations between Morocco and its neighbors in the African continent. Morocco is at the crossroads of the African and the European continent, is a strategic ally of the United States and Gulf countries and holds strong relationships with Sub-Saharan African countries. With a diplomacy aiming at strengthening South-South cooperation in different domains (economically, militarily, socially, etc), Morocco intends to become a good partner and a model for the whole region.

At the Political Level:

The king of Morocco Mohammed VI has introduced new reforms aiming at improving the political scene of the country by promoting democracy, good governance and transparency and fighting corruption. If these reforms are well implemented- and the political leaders as well as civil society are determined to make these reforms a success- the country would become a model of democracy and good governance in the whole Arab and African region.

At the Economic Level:

Morocco is the first country in the whole African continent which was granted an advanced status by the European Union. Also, Morocco has signed a free trade agreement with the United States. Developing strong economic relationships with Morocco would help sub-Saharan African countries integrate a world market that would lead to their economic prosperity.

At the Security Level:

Terrorism constitutes an important global threat that should be countered at the regional and global levels. A serious cooperation between the African countries would lead to the disappearance of a problem threatening all humanity. Also, Morocco and the sub-Saharan African countries can share their knowledge in the military domain in order to strengthen their military capabilities to face common threats.

Late King Hassan II once declared that Morocco was “a tree with its roots in Africa and its branches in Europe.” King Mohammed VI understands that the development of the whole African continent involves cooperation between the whole countries. The whole African countries should understand that in order to preserve the stability of the whole continent as well as the prosperity of its citizens, regional conflicts should be put aside and cooperation in different domains should prevail.