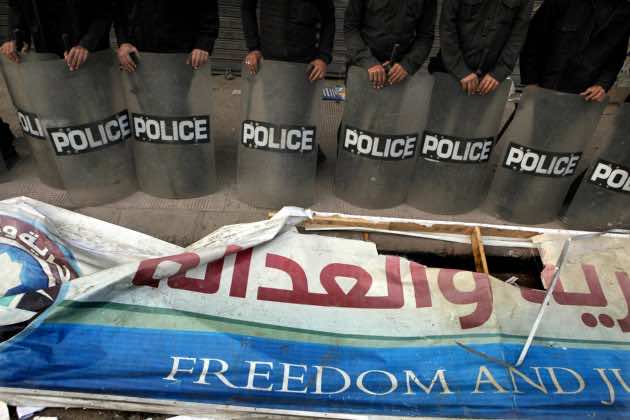 Police were out in force on Saturday outside the headquarters of Egypt’s Muslim Brotherhood a day after more than 160 people were hurt in running street battles between Islamists and opposition protesters.

An AFP journalist reported a heavy police presence at the building in the Mokattam neighbourhood, and the official MENA news agency cited a health ministry spokesman as saying more than 160 people were injured the night before.

Businesses in the area remained closed, and debris from the violence was visible everywhere.

“We have already cleared away four burnt buses and three cars,” Nasser Abdullah, an official charged with the clean-up, told AFP.

Hundreds of Brotherhood members, many of whom had been bussed in the previous day ahead of the opposition protest, were leaving the complex on Saturday.

Islamist President Mohamed Morsi, who has been in office since last June, is himself a product of the powerful Muslim Brotherhood.

Friday’s violence broke out after opposition activists marched to the building guarded by police and Brotherhood members. The two sides pelted each other with stones, emergency services chief Mohammed Soltan told MENA.

Shots were also heard, but there were no immediate reports of gunshot casualties.

Police used tear gas against the protesters before the clashes spilled over elsewhere in the normally calm Cairo neighbourhood.

Protesters captured and beat three Brotherhood members and also smashed up an ambulance evacuating one injured Brotherhood supporter and detained him, an AFP correspondent said.

The Brotherhood has seen about 30 of its offices across the country attacked in widespread protests against Morsi.

Well-organised despite decades of persecution under former strongman Hosni Mubarak and his predecessors, the Brotherhood was the main winner of parliamentary and senate elections last year.