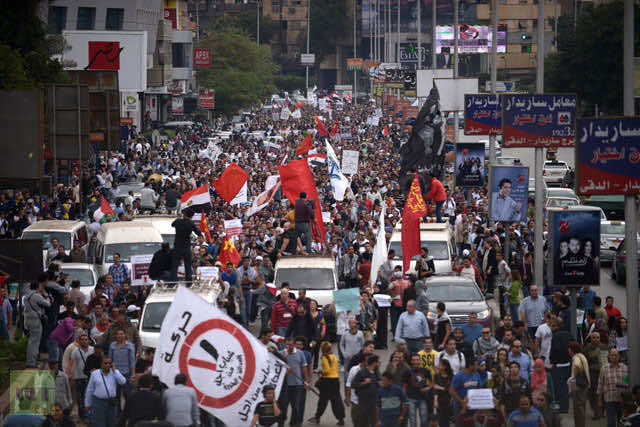 Two years after toppling Hosni Mubarak, some Egyptian activists say they are having to resort to violence against the ruling Muslim Brotherhood, which they say mirrors the old regime’s tactics on dissent.

“It’s turned into a war on the streets. With every strike against us, we strike back harder,” said Farid Sayyed, 24, during clashes between Islamists and opponents outside the Cairo headquarters of the Muslim Brotherhood.

The area surrounding the building in the Mokattam neighbourhood has witnessed fierce clashes between protesters, members of the Islamist group and police over the past week, injuring dozens.

Violence outside the Brotherhood’s headquarters is evidence that the powerful Islamist movement and its opaque political office are now identified as the true centre of power, eclipsing President Mohamed Morsi who emerged from its ranks.

The fleeting solidarity in early stages of the 2011 uprising between the well-structured Islamist group and the poorly organised pro-democracy activists has evaporated and their political divisions are now being played out on the streets.

“We went out to defend our political ideas. The Brotherhood failed to silence us, now they are trying to kill us,” Sayyed said bitterly.

“Now it’s personal, it’s a feeling of revenge that moves everyone,” he added.

“The issue has moved beyond politics now. The anger is personal,” he told AFP.

His view was echoed by activists from both sides.

“It has turned from a political issue to a personal one,” said Ahmed Said, 17, a member of the Muslim Brotherhood.

“The opposition provokes us, with very offensive slogans that include personal attacks,” he said.

Social media have also aggravated matters with pictures of “wanted” activists posted on websites with threatening messages, only stoking anger on all sides.

Amid increased lawlessness and frustration that the goals of the revolution have not been met, many activists believe peaceful protests no longer seem to work.

A video entitled “Why Riot?” made by the alternative news site “Mosireen” (Determined), widely watched on YouTube, explains the current anger in the wake of the revolt that drove out Hosni Mubarak.

“Change doesn’t mean a cabinet shake-up, nor is change defined by elections. Violence is not the aim. Revolutionary violence confronts a broken justice,” the video said.

Heba Yassin, spokeswoman of the Popular Current, a leading opposition movement, believes that “violence is a reaction to the absence of the rule of law. The oppressed take justice into their own hands.”

But the Muslim Brotherhood rejects any comparison with Mubarak’s repressive regime and says it is under attack.

“The true revolutionaries disappeared from the scene, which is now occupied by thugs and those who want to take revenge on the police,” Yasser Mehrez, a Brotherhood spokesman, told AFP.

“Things have moved beyond politics.”

Elected in June 2012, Morsi prides himself on being the first civilian  president after a series of military men, and the only head of state to come to power after a democratic election.

But in November 2012, Morsi issued a decree widening his powers and placing his decisions beyond judicial review.

This was eventually repealed under massive street pressure, but only after he managed to push through a controversial Islamist-drafted constitution.

The decree sparked accusations that Morsi was following in Mubarak’s dictatorial footsteps, and only reinforced the activists’ determination to bring about change.

Morsi’s Islamist supporters and his opponents engaged in deadly clashes outside the presidential palace in December and in a string of confrontations since.

The violence, political turmoil, a crippling economic crisis and deteriorating security conditions have further aggravated the climate in Egypt.

“Given the current political impasse, both the rulers and the ruled are tempted to use the street to settle their accounts,” said Ahmed Abd Rabbo, a professor of political science at Cairo University.

For Noha Bakr, a professor of political science at the American University in Cairo, the tension is exacerbated by “the demonisation of the other, and the trivialisation of bloodshed.”

“It could take Egypt in a downward spiral, in which the state could permanently lose control,” she warned.