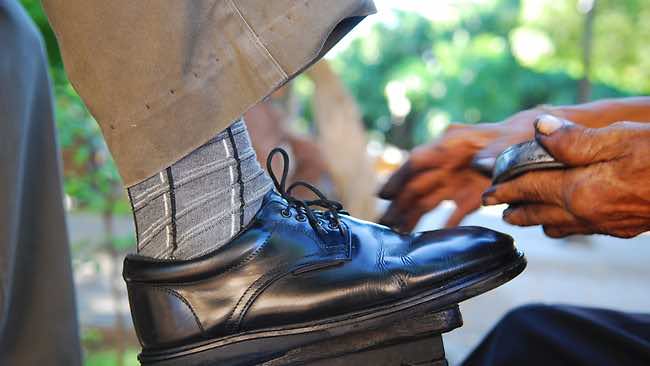 The bus stop seemed vacant, only Shaita was hunkering by the road, putting his box on the ground, waiting for the bus to drive him to Medina.

“Sir, shall I shine your shoes,” Shaita offered a service, as a man with black shoes passed by. “They are fine, thank you” the man said in low voice gesturing towards his shoes.

The driver stood up as he got notice of Shaita with his box, scruffy t-shirt and scratches on his bronzed face getting the bus.

“Pay or get off boy,” the driver said in a strong voice looking at his tickets

“Just the next stop,” Shaita had a seat showing self-confidence!

“What, the next stop!” The driver said looking at Shaita’s box with a look full of disgrace and humiliation.

“If you do not have money go on foot,” The driver vehemently reacted.

“Just the next station, what‘s the problem with you man?” Shaita raised his hand showing resistance.

“What! You are still shouting!” The driver caught Shaita from his clothes and pushed him out of the bus violently, “I have told you to get out, he said on edge and out of breath.”

“Remember me a Jabli; I know you well man.” (Jabli is a term to refer to people from one of the northern parts of Morocco), Shaita said with as the bus had left – leaving no room for Shaita to pay the driver back the humiliation he caused to him.

Shaita adjusted his jeans and retied them with a rope and he sat down again on the road waiting for another bus to take him to his workplace.

Shaita tapped his box chanting one of the most famous songs of Cheb Bilal, a Ray singer (ya lebabour yamon amour) and from time to time looking at the right of the road to see if any bus was coming.

“Wow, wow, Ah agalbi! (Oh my God) ” Shaita goggled at a convertible car that passed by, driven by a young man with a stunning girl sitting next to him.

“God gave you wealth unlike me,” said Shaita.

Suddenly Shaita stood up rapidly and put his fingers on his lips and a long whisper came from his mouth.

A man was riding his motorbike without helmet stopped and Shaita hurried toward him carrying his box and from time raising up his trousers, using his right hand!

“Where are you going Arbi?” He said out of breath.

“God brought you here for me,” Shaita said, He then rod behind and they drove on.

“A donkey pushed me out of the bus.”

“Really!” said Arbi, his eyes fixed on the road.

“Look Arbi, he did not know me well, but I will show him who I am when I meet him hanging around in our region.”

“He offended me my friend, but once I got him, I would show him my manhood and who we, wlad Alama, really are. Mountains do not meet, and men do, my friend.

“This city is only in favor of the outsiders!” Shaita added.

“This… this one, ”Shaita turned his head, as he passed by the bus and the driver who had humiliated him. Shaita took the opportunity to direct a wave of insults to the man.

“Stop, stop here Arbi, here I am, thank you my friend,” Shaita said as he was almost in the Medina.

“See you at the stadium tomorrow, Shaita said to Larbi.  The KAC of Kenitra was scheduled to play against the WAC of Casablanca, the following day.  .

Shaita got his box and moved from one café to another shouting:  “Cirage; Cirage …,” meaning shoe shine and striking the brush against the box to be noticed.

“Hi boy,” a man sitting crossed legs at the back of the café waved his hand. “Yes sir,” Shaita hunkered down as he brought out the shoes cream from the box. He first polished the man’s shoes by using a piece of cloth, and then he shined them with the cream. The man threw him 3 dirham on the table.

Shaita crossed the other street, with a melodic voice “cirage cirage…”

“Hi poor boy, go away; this territory is mine,” said an old man with a slight beard and a blue coat.  He put his box on the chair.

“Have you built it?” Shaita made fun of the old man.

“If you do not want to go I will bring those who will force you to do so,” the old man said with a sense of warning!

“Let’s see your bodyguards!”, before Shaita finished his words, he found himself down on earth; a young man came from behind and beat him!

Shaita quickly stood up, and ran away carrying his box without looking behind.

“What a day is this?” Shaita threw his box on the ground as he felt that he was all safe and no one was following him.

Upon a short break, Shaita went on trekking out of mood, pointlessly until he came across some boys in his age playing soccer.

“Hi there,” Shaita waved his hands, as he put down his box, took off his sandals and rolled up his washed-out jeans.

Shaita enjoyed the game a lot and seemed to forget all that had happened to him the whole day.

The last sun rays started vanishing behind the large buildings.

“It is too early” Shaita wanted the game to stay longer.

“Are you a ghost, the dark has already fallen.”

“Where are my box and my shoes?” I’ve left them here,” Shaita seemed mystified as he unrolled his jeans and said good-bye to the boys.

“Who stole my sandals and my box?” Shaita was alone and shock shaped his mood!

He could hardly believe that and he went on bare feet strolling through the boulevards of Kenitra Medina. “Who dared to steal my sandals?  Ah my God, people are gazing at me. I look as …Imagine if my sweet hearth Zahra saw me in such situation what would she say about me: a thief, criminal, or maybe a fool man!?

“Ahh! If I knew who stole my sandals.”

“Who would feed my mum and my sister this day?,” he said angrily.

People’s eyes forced Shaita to move to an empty street walking freely and far from their gaze. He had felt a passerby approaching, making sounds by his shoes.

“Cirage, sir,” as he looked at the man’s shoes!

“Ah my God…sorry sir!” he got confused when he remembered that he had lost his box, the sole source of his living!

A tip of a cigarette was on the ground; Shaita picked it up and put it in his mouth. “This all happen due to that Jabli, (the bus driver)” Shaita said as he puffed the cigarette looking at the horizon.

The dark had shaped the Medina totally. Shaita slid his grimy hand in his pocket and brought a picture and kissed it then raised it up towards the sky and screamed, “je t’ai………me Z’hairou.”