Meknes – The name of Meknes is derived from Miknasa, an Amazigh tribe. Meknes means the head of the tribe.

The history of Meknes city dates back to the 11th century. It was a military settlement of Almoravids and it would know the successions of many dynasties.

Many historians state that Meknes’ glory and golden age were reached in the reign of Moulay Ismail, the third king of the Alaouite dynasty, in the 17th century since it was the capital of Morocco. Meknes is considered as one of the imperial cities in Morocco and a significant historical monument. In 1996, it was inscribed as a world heritage site.

Meknes has many great monuments and places for tourists to visit: ramparts, gates, museums, mausoleums, the old medina, the new city (Hamria) and other places in and around the city.

Meknes city has a strategic location on the highland plateau of north-central Morocco between Rabat and Fes which makes it a passage to many neighboring historical monuments and landscapes. The climate is very nice. Spring and summer are favorite seasons for visitors since they display the most charming weather which paves the way for local festivals promoting the diversity of Meknes’ culture.

Meknes is known by its abundant water resources due to its location near the middle Atlas that is considered the biggest tank of water in Morocco; in addition to the richness and fertility of its lands. Such geographical qualities have made it an attractive to investment, namely in the agriculture sector.

Meknes is an agricultural city par excellence. The plantations of olive trees are one of its characteristics as well as its olive oil. The large rich fields of grapes are highly remarkable in Meknes and most of them are exported to Europe thanks to their good quality.

Such geographical advantages make Meknes qualified to host the international exhibition of agriculture. The latter covers 100,000 square meters and welcomes professionals and exhibitors from all over the globe. The rationale is to showcase the latest innovations that may lead to improving the agricultural field locally and globally.

Bab Al-Mansour is one of the most remarkable gates in Morocco and even in North Africa. It was built in the reign of Moulay Ismail by a Christian engineer who had converted to Islam. It was decorated by Moulay Abdllah (the son of Moulay Ismail).

Hedim Square is a large square  located  in the heart  of  the old Meknes medina. It was established by Moulay Ismail for the exposition of his army. It  has seen many changes and it has become now a place for cultural activities animated by story tellers to entertain tourists.

The Mausoleum of Moulay Ismail displays a panoramic view of the art of architecture ranging from different inscriptions and trappings to mosaics surrounded by Quranic and poetic words written in beautiful Arabic hand-writing. What is more attractive in the Mausolem is the dome in which there is the the tomb of Moulay Ismail and his kin.

The prison of Qara is a huge  underground prison built in the reign of Moulay Ismail by a Portuguese architect, Cara, who gained his freedom after constructing it. Such an immense prison   was reserved for violators law and opponents of the kingdom. Recently, it’s known many reforms and they are cherished by many visitors. Near the prison of Qara there is the dome of ambassadors that was a place for receiving foreign ambassadors by Moulay Ismail.

Sahrij Souani is a cistern that measures 300 ×148 meters with a depth of more than 3 meters. It is surrounded with a great ancient granary used for storing grains in the reign of Moulay Ismail. Though the later was affected by the earthquake that struck Meknes in 1755, it is still maintains its impressive architectural landmarks.

The Museum Dar AlJamai was built in 1882 during the reign of Moulay Alhasan I and it was the residence of his minister Mohamed Ben Al Arabi Al Jamai. It exhibits a collection of fascinating arts that mark the diversity of the local culture.

Moulay Idriss Zerhoun, 20 km from Meknes,was the capital of Moulay Idriss I the founder of the Idrissid’s state. It is surrounded by mountains. Such  glorious city was established on two hills and fought against the Roman invasion and won. Its history and attractive landscapes mesmerize visitors.

Walili (Volubilis): (About 23 km from Meknes and near Moulay Idriss Zerhoun)

Its history goes back to 40 A.D. It is an amazing tourist site that invites countless visitors yearly. Really, it is a great memorial of the Roman civilization.

The old medina in Meknes is a lively museum for tourists since it incarnates the major historical landmarks of the city.

What is appealing while visiting the old medina are its crafts. They are symbolic capital of the city that epitomize its originality and specificity. Souks (markets) are popular in the old medina and they are a target for buying traditional clothes and jewelry. They are distinct by their narrowness and most of times overcrowded. In the centre of the old medina there is the Medrasa Bou Anania, a stunning quranic school that goes back to the 14th century. The latter is located near Jamaa Lakbir (the big mosque) which adds a pinch of  spirituality to the old medina.

The planning of the New city was done by the architect Henri Prost in 1914 during the French occupation. It was reserved as a residence for the French and the European settlers, designed with the European architectural criteria. Hamria displays the landmarks of the modern city: hotels, restaurants, night life, cinema, theatre, cafes, cultural clubs, etc. It is the embodiment of the process of modernization that Moroccan society is trying.

Meknes art is very rich and varied and it mirrors the deeply rooted traditions, rituals and the way of life of the population. Meknes is known by its classical music that is transmitted from the founding fathers to the coming generations.

Andalusian Music: it is a classical music that displays the rich legacy of Muslim Andalusia carried by the first wave of Arab immigrants to Andalusia. The orchestra is composed of many musicians playing on classical instruments: violins, Rabab , tambourines, lutes and they sing in standard and Moroccan Arabic.

It goes back to the 12th century and was influenced by the rhythms of Andalusian music and popular songs that gave birth to what is called ‘Quasida’, a long narrated rhythmic story. Its serenity and smoothness have been a target for many artists and craftsmen who seek refuge to transcend the constrains of daily boredom. It employs poetic diction mingling standard and Moroccan Arabic to tackle both religious and profane subjects.

Aissaoua Music originated from the religious fellowship Aissaoua founded by a pious scholar Mohammed Ben Aissa in the 16th century. He is considered the spiritual father of Tariqa (Sufi fellowship) and becomes for posterity the Sheikh lkamal (the perfect man). Aissaoua music is the major art that characterizes Meknes city and it inspires many musicians by its special rhythms and instruments. 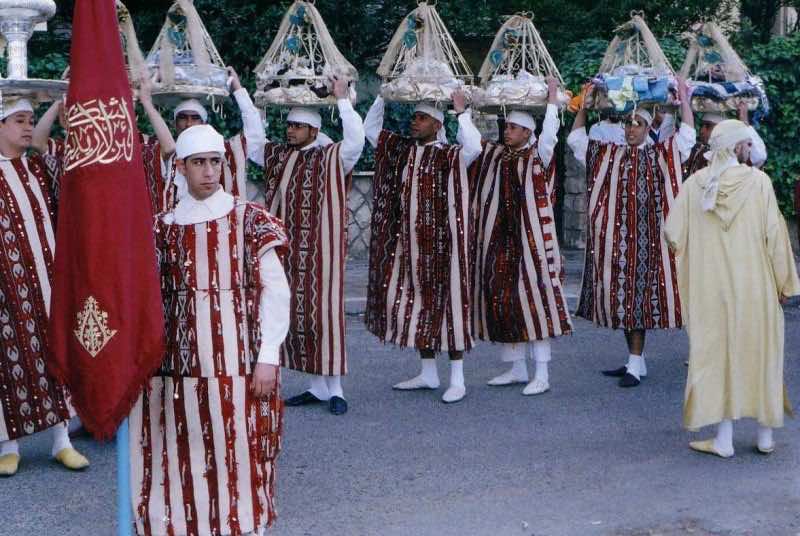 To promote the legacy of its art and culture, Meknes city organized last year the first edition of the National Festival of Aissaoua Art. The festival was an opportunity to celebrate the diversity and the artistic richness of such local distinct culture.