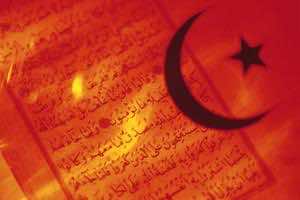 Muslim children, from a young age, hear words and phrases from Islam’s holiest book, the Qur’an. When Muslim babies are born, their fathers whisper the Islamic call to prayer in their ears. The book is considered to be the pure, original revelation presented to the Prophet Muhammad in the 7th century by the Angel Gabriel. Most Muslims believe the book is unaltered in form from the first years it was revealed. They view the Qur’an as a the primary spiritual source and guidebook for life, which states: “We have sent down to you the Book as clarification for all things and as guidance and mercy and good tidings for the Muslims.” (Surat An-Nahl, 16:89)

Students of all ages who learn about Islam and the Qur’an strive to read the entire book and memorize some of its chapters. They attend classes that teach Qur’an readings in Arabic, and many read the book individually in their native languages. While most of the world’s 1.3 billion Muslims are not native Arabic speakers, they learn to pray in Arabic. Some practicing Muslims, even children, take their learning a step further and work to memorize and recite the entire Qur’an.

The Qur’an is not the only source for teaching Islam. Muslims consider their Prophet Muhammad a personal model and teacher to emulate in Islam. Therefore, they strive to follow the behavior and customs that he took up during his life. This body of evidence is called Sunnah and was recorded in thousands of documents by scholars and observers during Muhammad’s lifetime and in the following century after his death in 632 A.D. The Sunnah are further divided into texts called Hadith, which contain all of Muhammad’s sayings and quotes that were recorded and passed down. Since the first century of Islam, Hadith scientists have analyzed and verified which quotes and records are authentic and therefore worthy of emulation.

Muslims consider these documents to be a central source of Islamic law, spiritual guidance and evidence of the framework of Islam. They believe that Sunnah and Hadith are considered legitimate complementary texts to the Qur’an, as well as valid, sacred sources of evidence about the religion.

Islamic legal scholars refer to the Qur’an and Hadith for information to help in the process of analyzing and formulating legislation in Muslim countries. Islamic law, called Shari’ah, derives both from the Qur’an and Sunnah. Islamic jurisprudence has developed its own area of Islamic texts throughout Islam’s history. These texts, while not always sacred, are considered sources for teaching law as it pertains to government, society, economy and other areas of life.

Islamic law is considered sufficiently complex as to require trained scholars who can analyze the implication of Shari’ah for jurisprudence in those Muslim countries that practice any form of Shari’ah law. Islamic legal scholars assess the original purpose of God and the Prophet when evaluating applications of Islamic law. Therefore, while not all Muslims may be schooled in the specifics of Islamic law, they are aware of the major tenets derived from their holy texts.

Muslims believe that their religion originates from the Prophet Abraham and that Islam shares the same line of prophets as Judaism and Christianity. They consider Islam to be the third of the ‘revealed’ religions. Therefore, Islam recognizes the Jewish Torah and revelations in Christianity’s Old Testament as legitimate sacred texts. Muslims believe Islam is one of the three ‘Abrahamic’ religions containing the third and final series of revelations from God.