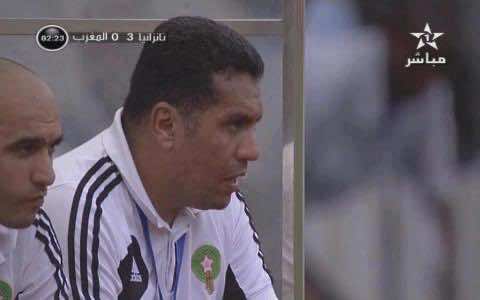 For over five months since he was appointed coach of the Moroccan national team, Mr. Rachid Taoussi did not stop to promise Moroccan fans that he will redress its situation and enable it to recover its erstwhile pride.

Most news outlets praised personality and dedication and said he might be able to be the person of the situation. Although the Moroccan people- who still call for the appointment of Mr. Badou Zaki, saw once again the Moroccan Federation dismiss their grievances- they supported him and wished him well since he took over from the former Belgian coach Eric Gerets.

One has to acknowledge that in his first test against Mozambique in October he succeeded to qualify the national team to the African Cup of Nations.

Yet three months later, Moroccans were to discover that the one who was touted and praised as the saviors of the Moroccans’ sinking boat, was just overrated. It is true that he won three titles with the MAS of Fez, in 2011. It is true that he has an outstanding track record as coach of local teams within our lame championship. But does this qualify him to lead the destiny of the national team at a time when it needs a person with charisma and a proven track record in coaching national teams?

Since the dismissal of Eric Gerets, I was among those who opposed the appointment of Rachid Taoussi, although I admit that he is one of the best coaches at the national and continental level. Like millions of Moroccans, I thought and still think that Zaki, with his personality and experience was the appropriate person to be at the helm of the national team.

The disappointing results achieved during the African Cup of Nations were to prove that the millions of Moroccans who opposed the appointment of Mr. Taoussi were right.

Why were they so? Taoussi started his journey with the national team by making a number of glaring and inexcusable mistakes. The first one was when he decided to exclude Husseina Kharja from the list qualified to the African Cup. Instead of him he called in players that were not fit for the competition. A case in point is that of Karim Al Ahmadi who was to blame for the goal scored by Cap Verde against the national team during the continental competition. The same player had made the same mistake during a friendly game just a week before the beginning of the African Cup.

How can a coach exclude a player with several years under his belt like Husseine Kharja? As an argument, Taoussi put forth that Kharja was not physically fit to take part in the continental competition, because he plays in Qatar.

In addition to that, during the African Cup, it took him two games to find a competitive team, when it was already late. The result was our elimination from the first round of the competition. After every disappointing performance, he uses the excuse of time and asked fans to give him more time to build a competitive national team.

Taoussi was afforded all the means every coach wishes to have, especially in Africa. Yet he lacked the courage and the experience to make the necessary decisions that could have lifted our Moroccan football out of its protracted coma.

Today’s result was the last straw, for no Moroccan, before the match, could imagine the disastrous scenario we witnessed. Again like during the African Cup of Nations in South Africa, the team performs quite well during the first half and collapses during the second one. All soccer observers agree in pointing out that the first half is that of players and the second one is that of coaches. This means that when and if a team does not perform well during the first half, the coach is there to redress the situation and breathe a new life into the team, either by means of making the appropriate replacements or by finding the right strategy to turn the game into your favor. Yet Mr. Taoussi failed in all these games to play this role.

To add insult to injury, he decided to spend the one-week-long concentration of the team in Dubai, arguing that this emirate’s climate is similar to that of Tanzania. Yet according, to Azziz Daouda, former coach of Said Aouita and Hicham El Guerrouj, there is a substantial difference between both places in terms of climate. Speaking to the Casablanca-based Radio Mars after the game, Mr. Daouda, said this is was a professional mistake by the coach and his aides.

In addition to that, the biggest question mark is why he decided to exclude most of the players who participated in the African Cup of Nations and why he aligned some players who barely have an experience with the national team at the highest level. Most people were stunned to see that 80 per cent of the players who performed well during the last game of the African Cup of Nations, were not called up to take part in the match against Tanzania. How can a coach play with a totally different team from the one he aligned less than two months ago?

Taoussi proved his failure and his inability to build a national team. In the process, he dashed Moroccans’ hope to see their team playing at the 2014 World Cup in Brazil.

It is time that Taoussi admitted his failure and stepped down. It is also time that those who appointed him- at the forefront of which Mr. Fassi Fihri- resigned and be held to account. Moroccan football would be better-off if Mr. Fihri took care of his pipes and sewages at the head of the National Office of Water and Electricity. What Moroccans need to turn this dark page are people who have a proven track record in sport management.

As long as we have the same people at the helm of the federation, Moroccans are nowhere near to see their national team lifted out of the disgraceful situation it is entangled in for several years now.

Samir Bennis is the co-founder and editor-in-chief of Morocco World News. You can follow him on Twitter @SamirBennis