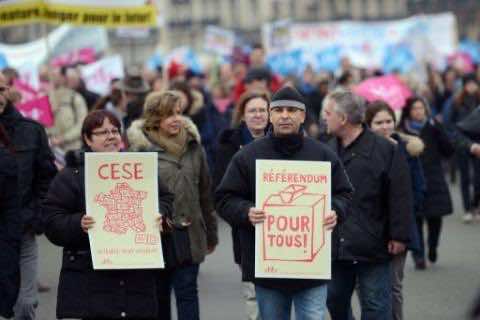 Tens of thousands opposed to French legislation allowing gay marriage protested Sunday on a route leading to the Champs Elysees after police banned them marching on the famed Paris avenue.

The hugely controversial bill to legalise same-sex marriage and adoption has been comfortably adopted by the lower chamber of parliament and will go to the Senate for examination and approval in April.

The upper house is unlikely to prevent the groundbreaking reform from becoming law by the summer. The protestors want the government to withdraw the project and put it to a referendum.

The demonstrators highlighted France’s flagging economy, beset by mass layoffs and spiralling unemployment, attacking Socialist President Francois Hollande’s government of ignoring pressing issues while pushing ahead with his election pledge of “Marriage for All.”

Banners held up from balconies read: “We want work not gay marriage,” and “No to gayxtremism.”

The Paris police had turned down a request from the protest organisers to march on the Champs-Elysees on the ground it would be a threat to public order, partly because it borders the French presidential palace.

The demonstrators lined a five-kilometre route from the Paris business district of La Defence to the roundabout where the Arc de Triomphe is located.

Police sprayed teargas to keep up to 200 protestors from trying to march on the Champs Elysees, AFP photographers said.

The movement against gay marriage has given France a new celebrity in the form of its public face, Virginie Tellenne, a Parisian socialite who goes by the name of Frigide Barjot.

Her assumed name — a play on the name of French film star Brigitte Bardot, a sex symbol in the 1960s — translates as Frigid Loony.

“We want the president to deal with the economy and leave the family alone,” Tellenne said Sunday.

Somewhere between 340,000 and 800,000 demonstrators flooded into the capital for an anti-gay marriage march in January, and Tellenne said she hoped the latest protest “will at least match” that.

As the demonstrators gathered under chilly, grey skies, an organiser exhorted them on a megaphone to periodically lift their arms and legs to keep warm.

“We understand your frustration but please remain in the same place,” he said.

A campaign orchestrated by the Catholic Church and belatedly backed by the mainstream centre-right opposition has steadily gathered momentum.

But Hollande’s support for the legislation has not wavered and his partner, Valerie Trierweiler, has revealed that the president will be attending the marriages of gay friends once the legislation is on the statute books.

Gay men and women can already adopt as individuals in France if approved by social services.

A separate law on providing medically assisted conception to gay couples, already extended to heterosexual couples unable to conceive, will be debated later in the year.