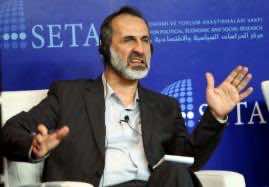 The Syrian National Coalition has refused the resignation of its leader Ahmad Moaz al-Khatib, the opposition bloc said in a statement released hours after he announced he was quitting.

Neither the Coalition’s presidential office nor its general assembly has accepted Khatib’s resignation. “They are asking Mr Moaz al-Khatib to go back to his work as the president of the Coalition,” the statement said.