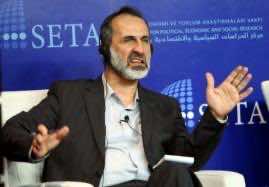 Opposition chief Ahmed Moaz al-Khatib on Sunday announced his resignation from the National Coalition, throwing Syria’s divided opposition into disarray ahead of an Arab summit.

“I announce my resignation from the National Coalition, so that I can work with a freedom that cannot possibly be had in an official institution,” Khatib said in a statement posted on his Facebook page.

Neither the Coalition’s presidential office nor its general assembly has yet accepted Khatib’s resignation, the group said in a statement.

“Some Coalition members have asked Khatib to return to his post,” an opposition source told AFP, adding that the group had yet to decide whether to accept Khatib’s announcement.

Hamad said he “hoped Khatib will reconsider his decision to resign, because it has come at a critical and important moment”, QNA said.

Khatib’s announcement threw Syria’s divided opposition into chaos just two days before Arab heads of state were due to decide in Doha whether to give it Damascus’s vacant seat in the Arab League.

Set up in Doha in November, the Coalition is a dissident group recognised by dozens of states and organisations as legitimate representative of the Syrian people.

Khatib’s surprise resignation came just days after the first election in Istanbul of a rebel prime minister, Ghassan Hitto, and just over two years on from the outbreak of a popular revolt against President Bashar al-Assad.

“For the past two years, we have been slaughtered by an unprecedentedly vicious regime, while the world has looked on,” Khatib said. “I had made a promise to our great people that I would resign if any red lines were crossed.”

An opposition source in Doha, where the Arab League is to hold a summit on Tuesday, told AFP that Khatib accused “certain countries, notably Qatar, of wanting to control the opposition” and of having imposed Hitto.

US Secretary of State John Kerry, reacting to the resignation while on a visit to Baghdad, said: “It is not a surprise … It’s almost inevitable, in the transition of a group such as the opposition, for these kinds of changes to take place.”

Coinciding with the resignation, an official in the rebel Free Syrian Army which has been fighting the regime for the past two years told AFP it does not recognise Hitto as rebel premier.

“We in the Free Syrian Army do not recognise Ghassan Hitto as prime minister,” said FSA political and media coordinator Louay Muqdad.

“I speak on behalf of the (rebel) military councils and the chief of staff when I say that we cannot recognise a prime minister who was forced on the National Coalition, rather than chosen by consensus,” Muqdad said.

Hitto himself on Sunday, after having pledged to set up a government based inside Syria, visited the northern province of Aleppo, large swathes of which are under rebel control, according to the Syrian interim government’s Facebook page.

He “held a two-hour meeting with a delegation bringing together (anti-regime) Aleppo province local council officials and representatives of the judicial council”, said the statement.

Hajji al-Bab, the No 2 of the Liwa al-Tawhid rebel brigade in Aleppo, said Khatib’s resignation would make no difference on the ground.

The resignation “has no impact on the ground because we didn’t vote for him. It concerns those who elected him, not the fighters,” he told AFP.

Hitto won an election in Istanbul after 35 out of 49 Coalition members voted for him following 14 hours of discussion in a closed meeting between key dissidents from inside Syria and abroad.

In Doha, with the opposition fragmented, Arab foreign ministers meeting ahead of a summit on Tuesday made no announcement on who would take up Syria’s seat, vacant since the League’s suspension of Damascus in November 2011.

According to a League official who declined to be named, the decision has been left to the full summit.

Before Khatib’s announcement, the National Coalition’s envoy to Doha, Nizar al-Haraki, said his group has has been invited to the summit, and that Khatib and Hitto were expected to arrive soon.

The Arab League on March 6 called on the coalition “to form an executive body to take up Syria’s seat” and attend the summit, although Iraq and Algeria have expressed reservations, while Lebanon has distanced itself from the decision.