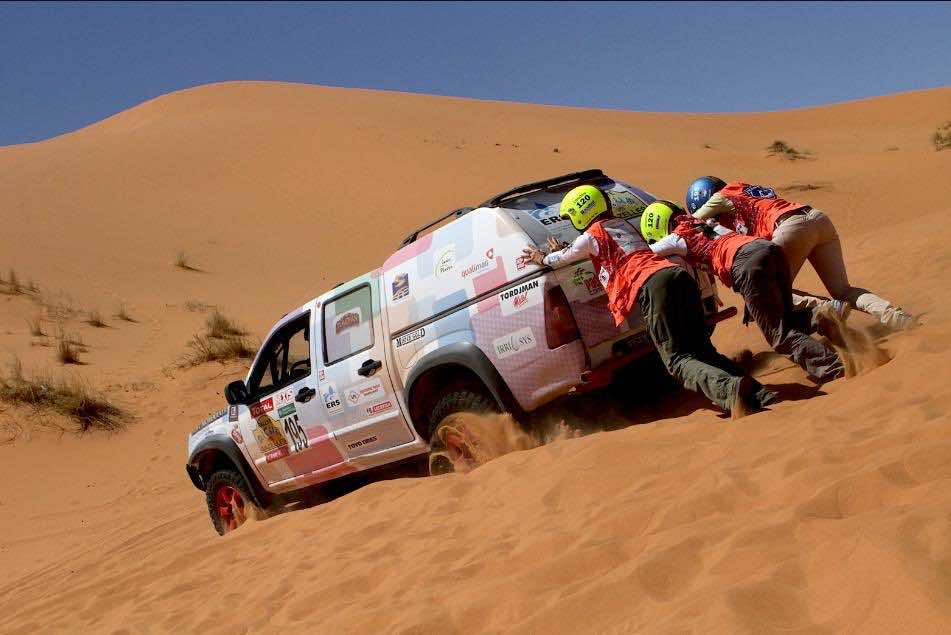 After a long day and a very elaborate strategy to get the lowest number of kilometers possible, crew number 315 (Saida/Safae) driving the Dacia Duster was relieved to get to the beacon before the last.

In the rush of the moment, Safae unfastened her seatbelt when seeing the flag marking the checkpoint. The car wasn’t totally at a stop, which the referee saw. The girls could not negotiate the heavy 10 km penalty for “no seatbelt.” It must be remembered that in this competition, a few hundred and sometimes dozen meters can make a difference in the final ranking. Their tears flowed and distress was legible on both faces of our gazelles. Because of the emotion, they got back on their way only to realize after 20km … that they hadn’t validated at the checkpoint. 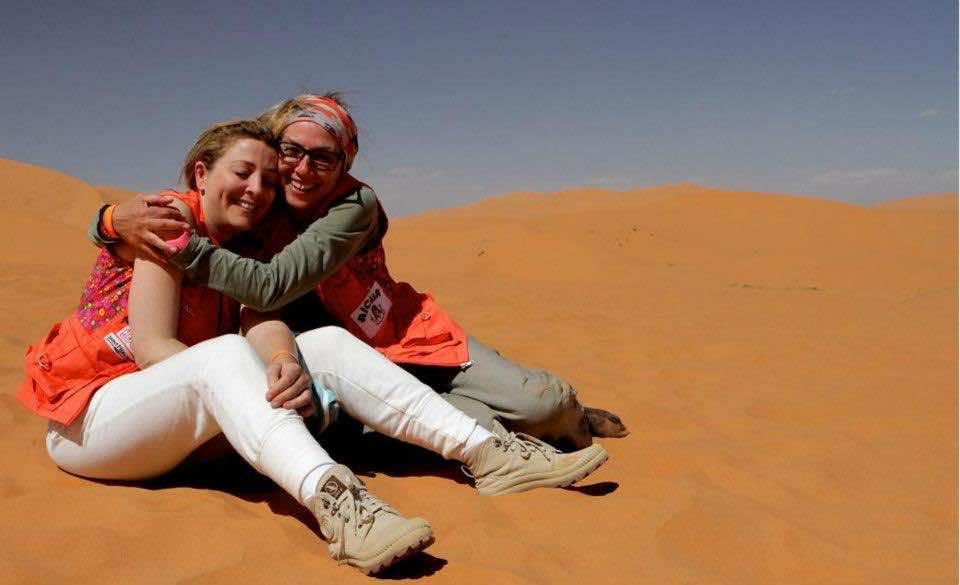 Result: they had to go back, adding 20 more kilometers to their counter and if that wasn’t enough, they could not get to the last beacon before the end of the day. With this heavy punishment and confusion that followed, it is also the dream of a good ranking that went away. Discouraged by the events of the day, they will have to find the strength to keep fighting and to stay motivated.

This is not the only team to have gone through a period of frustration. Geraldine and Sophie (team 224) doubted in the middle of the day. Doubts are normal for gazelles during the first few days of the competition. After the joy of the first days comes a feeling of panic: still six days of competition, conditions are difficult, one must be patient … very patient.

All the Moroccan gazelles pasted the 7 checkpoints except for Team Dacia, which unfortunately couldn’t validate the last one of the day before bedtime because of their problems. 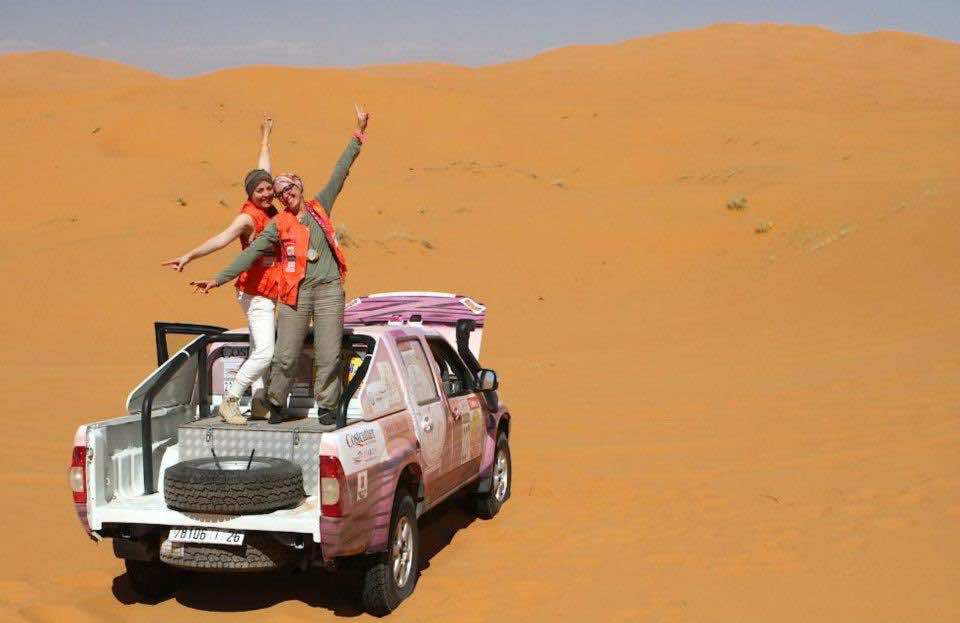 Céline from crew 197 has a cold, but it cannot undermine the confidence of the team.

The race today, it must be remembered, was not the most pleasant. Large plains, a lot of wind and dust , all of which have made navigation difficult and, therefore, frustrating. Not good either for vehicles that go through very rough sections, especially when they drive on the famous “cauliflower”. These football-sized plants are spread in the desert and can cause a lot of damage.

Saturday night at the bivouac 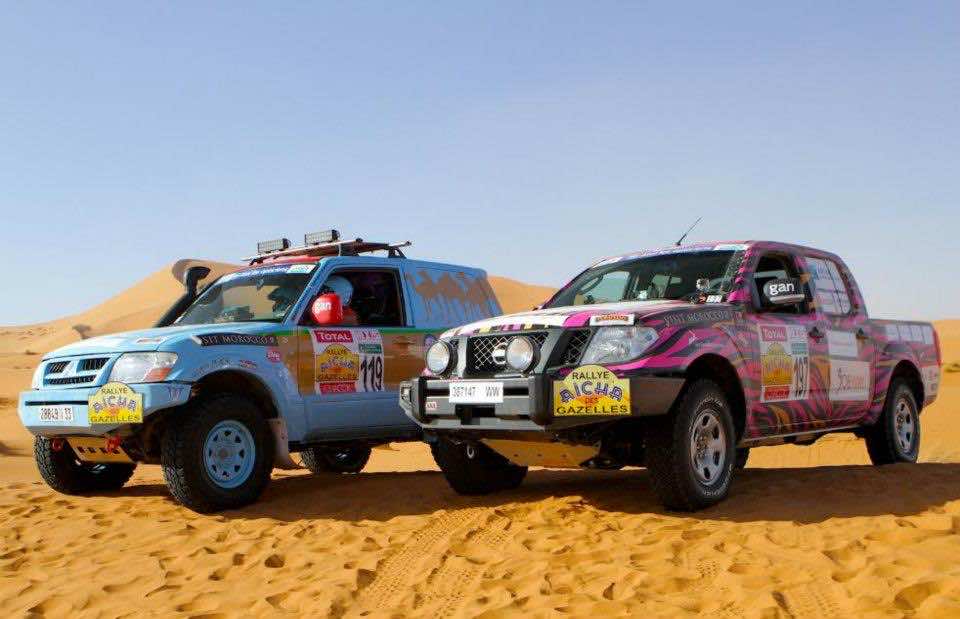 The section of the dunes of Merzouga, with that of Shegaga, is one of the hardest, and for good reasons. A wind blew from the south for a few days making the dunes much steeper than they usually are. The land is already difficult to navigate in normal times due to fast flowing sand, and all gazelles have understood why Merzouga is so famous. The landscape was misleading: a breathtaking horizon, dunes everywhere, ridges overlooking an endless blue sky … but the challenge was as hard as it was beautiful!

Slowed by their overheating engine, crew 227 barely managed to cross the 2nd beacon of the most difficult section in the dunes, called the X section … “X” for EXTREME. Preferring to return to the bivouac to adjust their mechanical problem, they managed to keep smiling and stay positive as true champions. 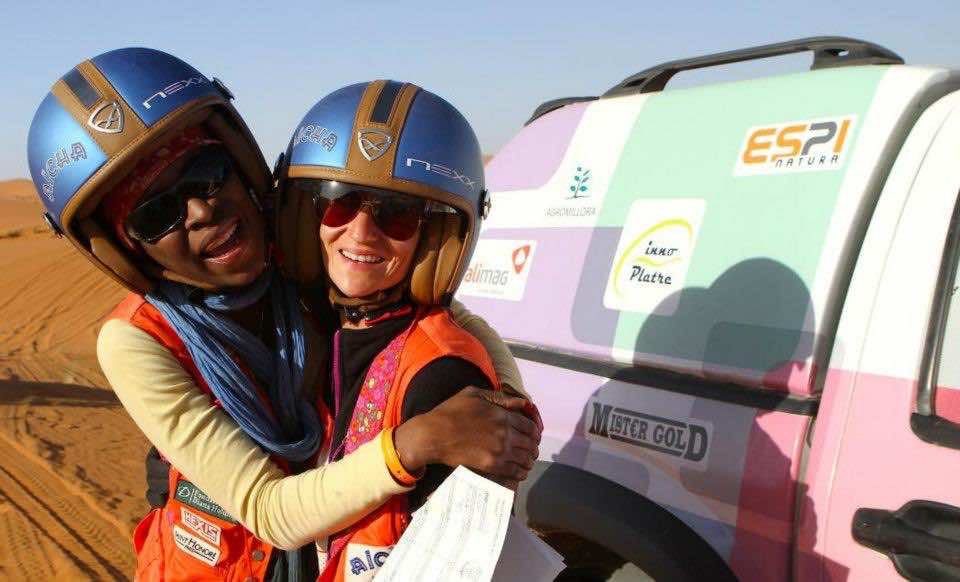 Crew 224 chose a less compromising path. Everything went very well until 3.30 p.m. when they crossed the 5th beacon. They were heading towards the 6th, thinking they could get back to the camp early but were mistaken! They looked for the 6th beacon … without ever finding it. That said, it gave them time to appreciate the beautiful landscapes of Merzouga and to do their good deed of the day: they found time to help 5 vehicles which were stuck in the sand.

Crew 224 is getting really good results: 4th as first time competitors and 24th in general. Keep supporting them through messages, which I quote “are very heartwarming and make them feel less alone” said all Moroccan gazelles. So take your laptops, smart phones, pens … and encourage them! 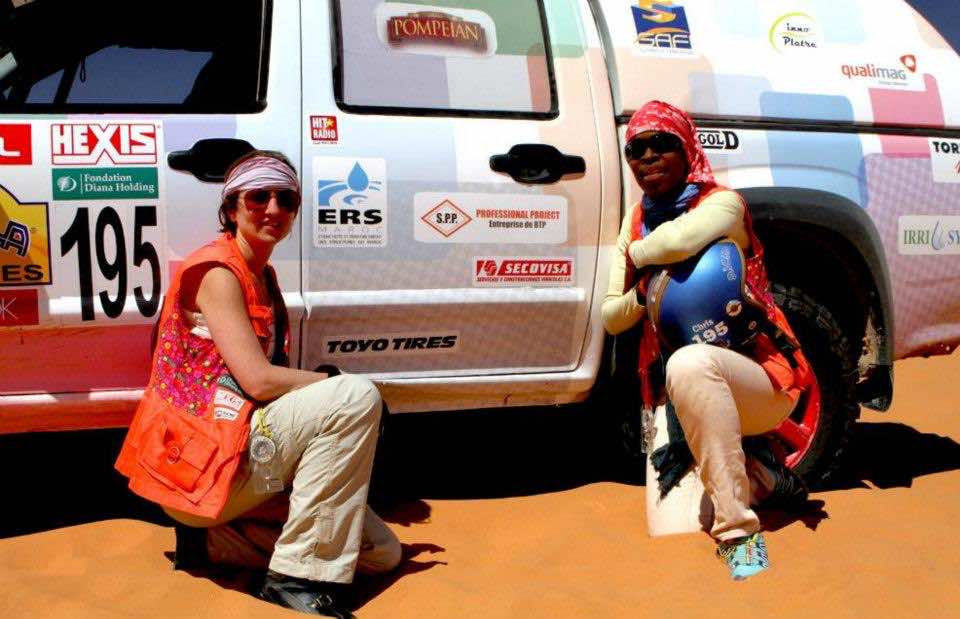 Small consolation for crew 315, which learned this morning that the penalty it got yesterday was canceled, as for all the gazelles. The girls are, however ,still bitter because of the implications of this penalty. Still, today was a relatively good day for the team and despite ALL they remained motivated.

Crew 193 lost their first rim on a beautiful hump of camel grass in the dunes. But nothing can stop them, they have changed it in no time, teaching many men a lesson and making their husbands proud. Better, they did a triple webbing with other gazelles to free a vehicle from the sand.  That’s the famous”gazelle” spirit! 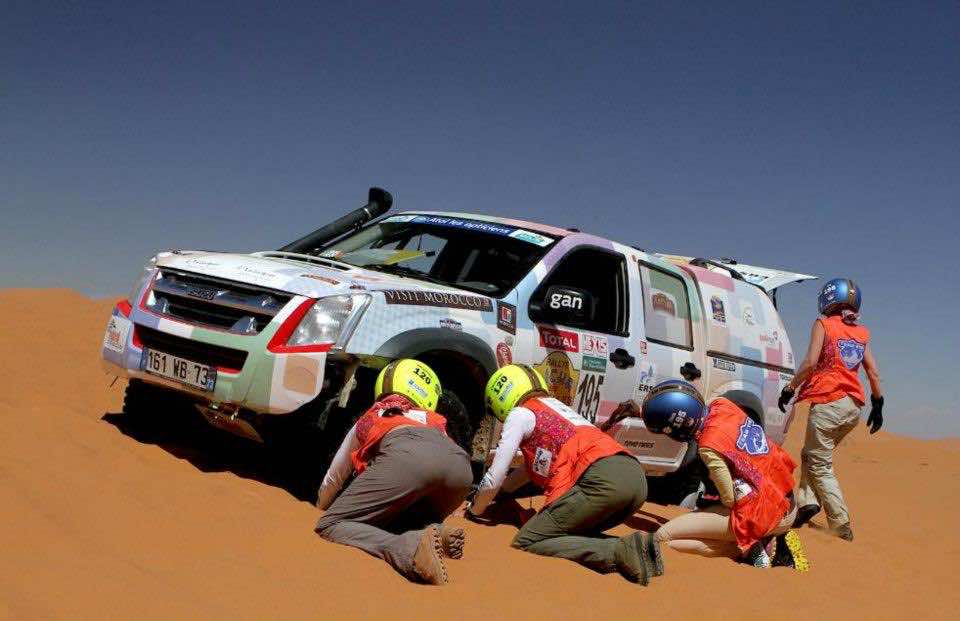 However, they also experienced the fact that some gazelles are here to win and, therefore, have a short memory : when Adeline and Fabienne in turn needed help, the same crew that they had helped passed without stopping … no “gazelle” spirit anymore!

All the girls arrived at the bivouac safe and sound but the wind was likely to shorten the night. Sunday was the start of the first marathon, and gazelles were on their own and had to sleep in the desert without returning to the bivouac.

Aren’t they afraid you say? Clearly, you don’t know them. 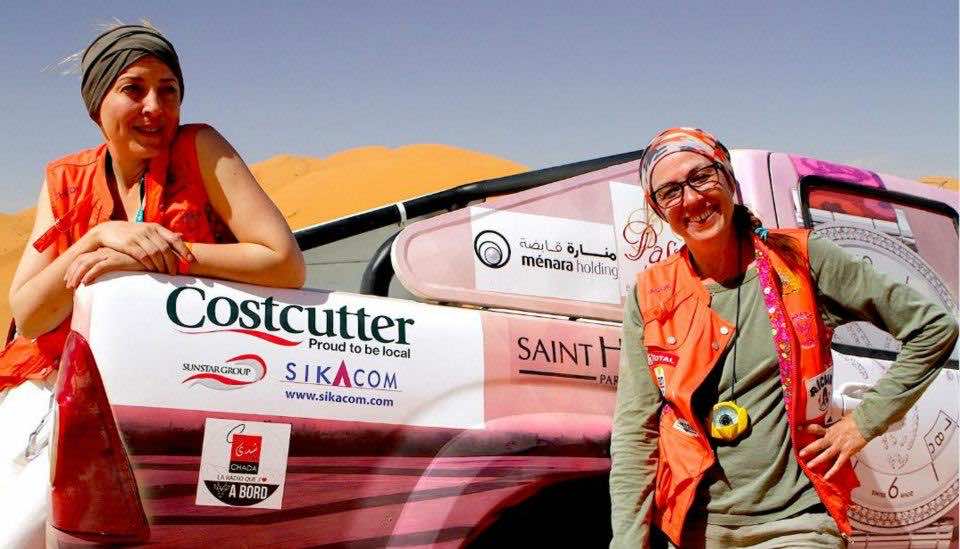