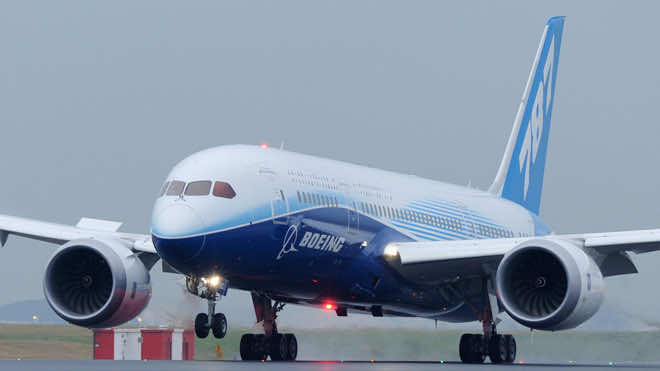 Aerospace giant Boeing announced Monday that it plans to undertake a test flight Monday afternoon in its latest step in returning to service the 787 fleet, grounded by two battery incidents.

The two-hour flight is expected leave at approximately 1800 GMT from Paine Field in Everett, Washington.

Boeing described Monday’s flight as a “functional check flight” designed to to “validate that all systems function as designed.”

After completing the first flight and analyzing the results, Boeing plans a “certification demonstration flight”.

That flight, Boeing said, “will demonstrate that the new battery system performs as intended during flight conditions.”

Boeing’s fleet of 787 planes were grounded globally in January after a series of problems with the battery system.

A short circuit started a fire on a parked 787 at Boston’s Logan Airport and smoke from a battery forced an emergency landing in Japan.

On March 12, the Federal Aviation Administration approved Boeing’s plan for testing the batteries. The FAA described the certification plan as the “first step in the process to evaluate the 787’s return to flight.”

Boeing has said its fix includes the addition of new insulation materials, stepped-up production and testing processes and a containment system.

Effects from ET-302 Crash Reverberates in Morocco, Across the World