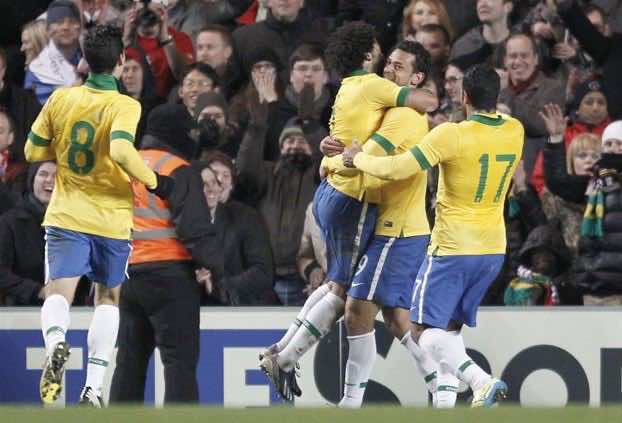 Fred spared Brazil’s blushes with a last-gasp equaliser to rescue a 1-1 draw against Russia in Monday’s friendly at Stamford Bridge.

Luiz Felipe Scolari is still waiting for the first win of his second spell as Brazil manager following this lacklustre display on a freezing evening in west London, but it would have been even more embarrassing for the former Chelsea boss without Fred’s late intervention.

But Fluminense forward Fred snatched a dramatic equaliser when he tapped home Marcelo’s cross from close range in the last minute.

For Scolari the fixture marked a return to Chelsea, where he spent seven months before being sacked by Roman Abramovich in 2009, but he failed to take the opportunity to prove a point to the Blues’ Russian owner.

The Selecao, continuing on their global tour in the build up to staging the 2014 World Cup, clearly have plenty of room for improvement.

Capello, who has been linked with a possible move to Chelsea in the close-season, was back in the city he called home for four years during his England reign.

This impressive result suggested he may yet get a call from Abramovich to return to English football.

The CSKA Moscow centre-back’s low shot skidded across the turf, but QPR’s Cesar was equal to his effort. That wasn’t Brazil’s only early scare.

Ten minutes later Cesar’s goal was again threatened as the ball was pumped into the box and Roman Shirokov and Aleksandr Kerzhakov both saw shots blocked.

Cesar then had Real Madrid midfielder Kaka to thank for some last-ditch defending as the playmaker got another block on a shot from Kershakov and Shirokov’s follow up.

Brazil, five-time world champions, saw their goal continually peppered as defensive midfielder Shirokov then tried his luck from range in the 15th minute.

It took nearly 30 minutes for Scolari’s side to click into action and even then Neymar shot high and wide of Russia keeper Vladimir Gabulov’s goal after surging into the box.

Five minutes before the break, Fayzulin cut in off the left touchline, beat Barcelona’s Daniel Alves before lashing into the side netting as Russia regrouped.

Neymar again wasted another chance, and for all their trickery and intricate passing, Brazil just couldn’t find a way past Russia’s resolute defence in the opening 45 minutes.

Brazil’s Chelsea defender David Luiz looked eager for a goal on his home club ground, only for Russia’s wall to deny him when he stepped up to strike a 25-yard free-kick on the hour mark after Shirkov fouled Oscar.

And that was to be the Blues star’s last contribution as he was replaced by Hulk as Scolari went for the win.

Brazil had dominated for the majority of the second half without causing any damage.

Russia always looked efficient in possession and it was third time lucky as Capello’s men finally broke the deadlock 18 minutes from time.

Brazil failed to clear as Russia bided their time before Fayzulin picked his spot and stroked the ball home from 15 yards.

Two minutes later Marcelo missed the target as he ran onto Hulk’s pullback before Fred finally restored a measure of Brazilian pride with his 90th minute strike.