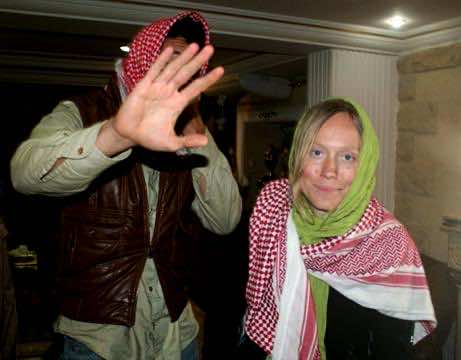 An Israeli man and a Norwegian woman kidnapped by armed Bedouin tribesmen in Egypt’s Sinai peninsula four days ago were set free on Tuesday, Egyptian and Norwegian officials said.

The pair, who had been abducted on Friday, were released thanks to the “efforts” of Bedouin tribesmen, said an Egyptian security official cited by MENA state news agency.

They were in good health, and were freed in the early hours of the morning by tribal leaders, said the agency, without giving further details about the conditions for their release.

The Norwegian foreign ministry confirmed the release of the woman identified as 31-year-old Ingvild Selvik Ask, a paediatrician.

“We are relieved and happy that the situation has unravelled,” ministry spokeswoman Ragnhild Imerslund told AFP in Oslo. “She was apparently treated well and is in good shape.”

The woman, who was transferred to Cairo, was quoted as telling Verdens Gang, a tabloid in her homeland, that “it was the craziest safari I’ve ever been on”.

Her travel partner was taken to Taba, on the border with Israel.

Six gunmen had intercepted the tourists’ car and forced them into their truck on Friday as they travelled between the resort of Taba, on the border with Israel, and the coastal town of Dahab further south.

A relative of the man who was kidnapped identified him as Israeli Arab, Amir Omar Hassan, and said he had contacted his family to tell them he had been abducted and was being treated well.

A spate of such hostage takings, which usually last for no longer than 48 hours, broke out in the restive Sinai after an uprising forced out president Hosni Mubarak in early 2011 and battered his security services.

The kidnappers are normally Bedouin who want to trade the hostages for jailed fellow tribesmen.