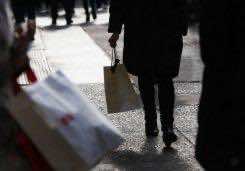 US consumer confidence plunged in March after February’s jump, the Conference Board reported Tuesday.

The Conference Board’s index lost 8.3 points to 59.7, with consumer views of both the present situation and the future diminishing from February.

The fall came as the government’s sharp “sequester” budget cuts came into force at the beginning of March, and federal agencies announced they would trim contracting and begin forced unpaid furloughs of workers from April.

“This month’s retreat was driven primarily by a sharp decline in expectations, although consumers were also more pessimistic in their assessment of current conditions,” said Lynn Franco, director of the board’s economic indicators.

“The recent sequester has created uncertainty regarding the economic outlook and as a result, consumers are less confident.”