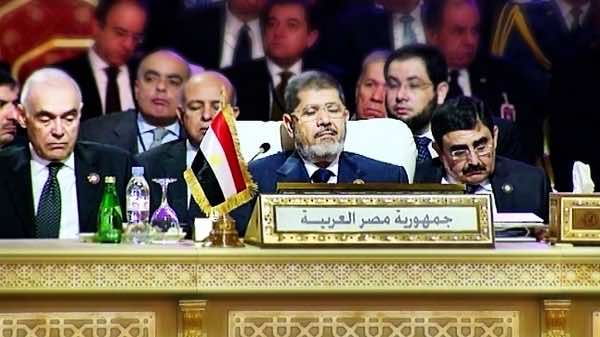 A picture of President Mohammed Mursi and other members of the Egyptian delegation falling asleep in the opening session of the Arab League summit held Doha on Tuesday is being circulated by Egyptian activists online with a touch of satire.

President Mursi, Foreign Minister Mohamed Kamel Amr, the president’s aide on foreign affairs Essam al-Haddad, and Refa’a al-Tahtawi, chief of the Egyptian presidential Cabinet, all appeared shut-eyed in the opening session of summit during a speech by the Iraqi representative Mousa al-khouzaei.

One twitter user described the incident saying: “A new scandal for Egypt…Mursi and the accompanying delegation in deep sleep during the opening session of the Arab League.”

Another (@dedofadel) said, “Mursi is the first elected civilian asleep president.” ?A third tweep, @shaimaa_hosny19, who identifies herself as a lawyer, poet and author who is against the Brotherhood, said, “Mursi is always asleep and does not care.”

“It is clear that is his personality inside or outside Egypt,” she added.