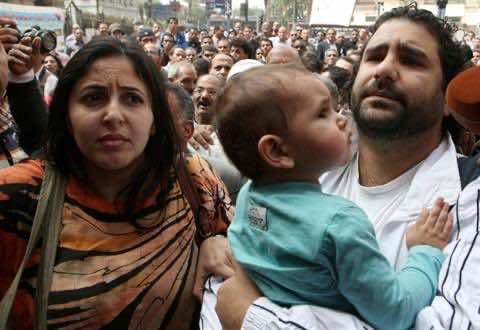 A pro-democracy activist and opponent of Egypt’s ruling Muslim Brotherhood turned himself in to the prosecutor’s office for questioning on Tuesday, a day after an order for his arrest.

In a tweet sent during his questioning, the young man said he refused “to answer questions because the prosecutor general is not impartial” and mocked the case against him.

The investigation against him had been prompted by a tweet he had received rather than sent himself, Abdel Fattah said.

The activist arrived at the prosecutor’s office with his wife and son, as dozens of sympathisers chanted: “Down with the power of the guide,” the supreme leader of the Muslim Brotherhood movement of President Mohamed Morsi.

Two of them said they refused to hand themselves in because they did not recognise the legitimacy of the Morsi-appointed prosecutor general.

On Sunday, the president warned: “If investigations prove that certain political figures are implicated, the necessary measures will be taken against them, whatever their status.”

The warning followed bloody clashes in Cairo last Friday between pro-opposition demonstrators and Islamists from the Muslim Brotherhood that left 160 people injured.