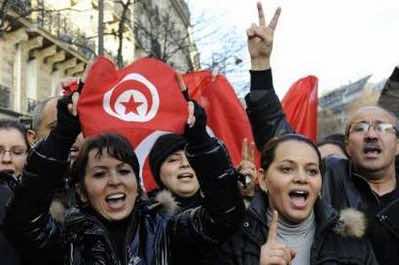 “Down with dictatorship, down with capital!” and “Solidarity with women around the world!” rang the chants of thousands marking the opening in Tunis Tuesday of the World Social Forum, an alternative to the elite annual event in Davos.

Anarchists, ecologists, pacifists and trade unionists rubbed shoulders with Sahrawi independence activists, veiled women and Arabs in traditional jellabas as they marched through the heart of the capital at the start of the anti-globalisation event being held in an Arab country for the first time.

A carnival atmosphere reigned at the demonstration on Habib Bourguiba Avenue, the epicentre of Tunisia’s Jasmine revolution just over two years ago that sparked Arab Spring uprisings across the region.

Slogans were chanted in a medly of languages and by people from a blur of different nationalities, with one group of Japanese, dressed in yellow, calling for an end to armed conflict, as others demanded “Freedom for Palestine.”

Some of Tuesday’s protesters waved portraits of Tunisian secular opposition leader Chokri Belaid, who was gunned down outside his home last month, demanding to know who the killers were.

Before the revolution of January 2011, a meeting of the anti-globalisation event in Tunisia would have been “unthinkable”, said Mohamed Jmour, a leader of Belaid’s leftwing party. “Thanks to the sacrifice of our people, we have made it happen.”

Some 30,000 individuals and 4,500 organisations are due to attend the five-day event, which casts itself as an alternative to the World Economic Forum in Davos and will address a range of subjects from the environment to democratic governance and women’s rights.

“The revolutionary processes, rebellions, uprisings, civil wars and protests” will be at the heart of the discussions, say the organisers, as will the social and economic problems behind the Arab Spring and the crisis in Europe.

Human Rights Watch on Tuesday accused Algeria of preventing around 100 civil society activists, including members of the Algerian League for Human Rights, from travelling to Tunis to attend the forum.

“Ennahda wants to establish sharia law and deprive women of their liberty. The same is happening in Egypt,” where the Muslim Brotherhood also shot to power after a 2011 uprising, said Zeineb Chihi, a university participant.

Ahlem Belhadj, chair of the Tunisian Association of Democratic Women, criticised violence against women “that seeks to keep them out of political life.”

But a failed attempt last year to introduce the concept of gender “complementarity” rather than equality into the text raised serious doubts about Ennahda’s real intentions.

The role of women will be a key theme of the hundreds of workshops to take place in Tunis, which as well as touching upon politics and economics will address sensitive issues in the Muslim world like sexuality.

The WSF has its roots in 1999 street protests in the US city of Seattle but began two years later in Brazil’s Porto Alegre.

Organisers of the alternative event hope to draw support from the shared goals of the anti-austerity protests in Europe, the Arab uprisings and Occupy movement in the United States, for social justice and a fairer distribution of resources.

The security forces have deployed heavily around Tunis, with the authorities seeking to ensure the safety of the event, after waves of social unrest and bloody attacks blamed on hardline Islamists that have rocked the country since the revolution.

“It proves that this country has wide-ranging freedoms,” he said on national television.

Economically, Zawiya hoped the WSF would “mark the beginning of the tourist season,” a strategic sector that has been hard hit in the past two years.