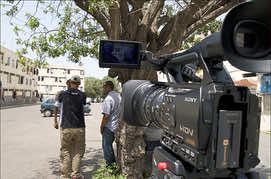 Masrah Al Jarima (Scene of the Crime) is a television programme that portrays high-profile crimes.

Aired on Med1 TV, the programme focuses on terrorism as well. A total of six episodes are devoted to acts of terrorism perpetrated in Morocco, according to the channel’s management.

Immediately, those convicted in relation to the terrorist attack threatened to go on hunger strike. Their families also expressed disappointment and distress over the “Scene of the Crime” episode.

Aicha Hasni, mother of Islamist convict Youssef Khoudri, strongly attacked the dramatisation of her son’s story. Khoudri was sentenced to sixteen years in jail for the Sidi Moumen attack.

Rachida Benber, mother of brothers Othman and Morad Raydi, both sentenced to ten years in prison for the same crime, had the same reaction.

“This programme has done us great emotional harm six years after the event,” the families said in a joint statement. “It is an unwarranted additional, bitter judgement, attacking the dignity of those involved and their families.”

The communications minister and government spokesman Mustapha El Khalfi contacted Medi 1 TV to recommend that the channel abide by professional ethics, particularly by not releasing the names of those convicted.

“The channel responded favourably to my intervention, out of respect for the families of the convicts,” he said, adding that the decision to block or allow the broadcast lies with the High Authority on Audio-visual Communications (HACA).

“The minister has overstepped his powers by contacting the channel’s management,” Saadouni told Magharebia. “Really, only the HACA has the authority to judge any television production, and in any case we’re fully prepared to answer for ourselves if there has been any professional misdemeanour.”

“In putting together these programmes on terrorism, we’re trying to show how young Moroccans become terrorists, and how vigilant we need to remain,” Saadouni explained

Terrorism is a crime like any other, whose dramatisation or re-enactment should not normally cause people such anxiety, he said.

Defenders of human rights stressed that personal dignity must be respected, even for those convicted of crimes.

Still, others see criminals throughout the world as well-known public figures, and that the public should be told about their misdeeds so that lessons can be learned.

As long as cases have completed their passage through the courts and deemed “case closed”, there is no harm in them being dramatised and the crimes reconstructed, Justice Minister Mustapha Ramid noted.