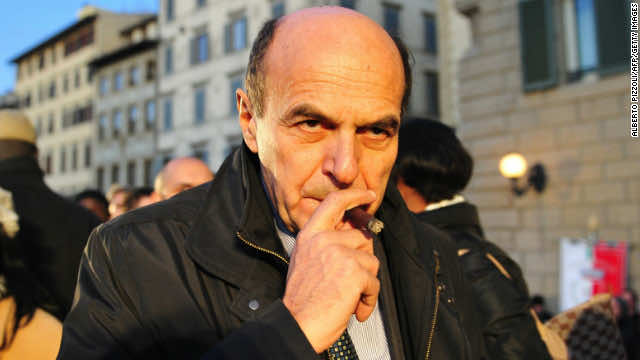 Centre-left leader Pier Luigi Bersani said Wednesday that only a mentally ill person would want Italy’s top job as he scrambled against the clock to secure enough support to form a government in the recession-hit country.

His comments came during last-minute talks with political parties before time runs out for Bersani, who was asked by Italy’s president last week to try to forge a coalition but has been unable to strike a deal with his rivals.

“Only a mentally ill person could have an itching desire to govern right now,” Bersani said during talks with the anti-politics 5-Star movement, which he has repeatedly tried — and failed — to woo.

“I want things to be clear: I am ready to assume a huge amount of responsibility, but I ask everyone else to all take on a little bit themselves,” he said.

Business leaders and trade unions sounded the alarm this week over the parlous state of the eurozone’s third largest economy.

Italy is suffering its longest recession for 20 years and young people have been hit particularly hard, with unemployment rates hitting almost 39 percent in January while the economy is forecast to shrink by 1.3 percent this year.

“It is clear that the political instability is not helping,” Marcello Messori, economics professor at the Luiss University in Rome told AFP.

He said he was “very concerned” that the country’s economic health would be neglected as Italy’s politicians wrangled.

Bersani has hoped to persuade individual members of other parties to give their support, proposing a limited programme of urgently-needed reforms in exchange for their backing at a confidence vote.

Proposals on the table include a cut in taxes and expenses of political parties, and a reform to the complicated electoral law which has been blamed for landing the parties in the current crisis.

On Wednesday, the 5-Star said it refused to back the former Communist and ruled out Bersani’s chances of taking some votes from within the movement, which it said acted as one body.

The parties have been at loggerheads since a February 24-25 vote which saw the centre-left win by a whisker but without the majority in the upper house necessary to govern.

The battle to form a government has begun to wear on the centre-left Democratic Party (PD), which is split over whether Bersani should carry on as party leader.

Bersani has constantly ruled out working together with former premier Silvio Berlusconi and the centre-right, but there are those within his party who think allying with the enemy would be better than returning to the ballots.

Scandal-hit Berlusconi’s People of Freedom party (PDL) hit out at Bersani on Tuesday, warning him to take the offer to form a coalition government with them or all future deals would be off the table.

Whoever comes to power is unlikely to last more than a few months or a year at most, analysts say.

Italy’s main FTSE MIB index was down 1.54 after Bersani’s comments and investors appeared to be watching the situation carefully amid fears that the country could slip back into the debt crisis.

Italian borrowing rates fell slightly in a 10-year debt auction on Wednesday, but rates were up on five-year bonds and demand declined.

The spread — the difference between the German and Italian sovereign 10-year bond yields, which is used to gauge market confidence — rose to 4.72 percentage points.

It had spiked to 4.90 after the February election, dropped after the European Central Bank played down the impact of the Italy ballot, and has now begun to edge slightly up again.

Bersani is expected to meet President Giorgio Napolitano on Thursday or Friday to present his plan for a government. If he fails to convince him, the president could put in place an interim technocrat government to carry out key reforms.